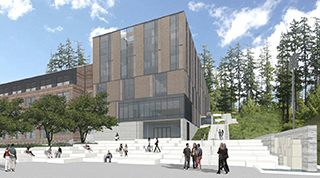 Image courtesy of Lease Crutcher Lewis [enlarge]
Lewis is working on a $68 million science building at the University of Washington’s Bothell campus.

The building market in Seattle is revving up, and Lease Crutcher Lewis is ready to capitalize.

Since the recession began, Lewis has doubled efforts to deal with a more challenging contractor market.

“For four or five years, Lewis has been focusing heavily on being lean in everything we do,” said Carey Crutcher Smith, the firm’s marketing coordinator. “We’ve been leveraging building information modeling software so our estimates and design coordination are faster and more precise and subcontractors have the confidence to bid lower. Also, field crews get one-page and one-screen how-to manuals for that day’s work in the field. Just-in-time delivery keeps things running like clockwork.”

As a result, Smith said Lewis is achieving better productivity rates, which are “really paying off as jobs are setting aggressive cost, schedule, quality and safety targets and then beating them one after another.”

Although retail and large health-care projects are slow these days, the apartment market in Seattle is strong, as well as downtown Bellevue, Smith said. “The office market has been gearing up for the next round, both Amazon-related and in general,” she said. “The same is true with hotels. Retail is still slow and public buildings are pretty slow right now.”

With the improving economy, Lewis has boosted its staff. “We’ve been adding staff at a moderate clip as workload and prospects have increased,” Smith said. “As always, the key is finding great people and only growing to the extent that we can do that.”