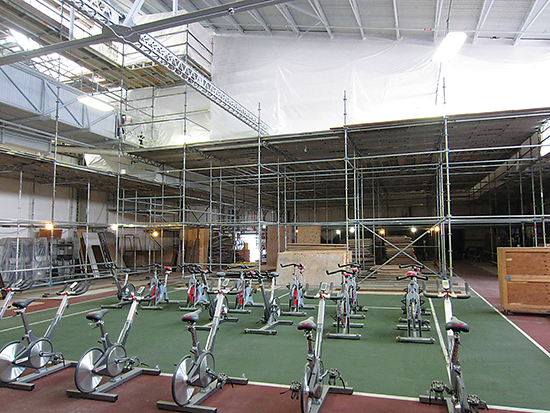 In September 2011, North Wind Services of Idaho Falls, Idaho, called Washington Commercial Painters for assistance with a building on the U.S. Coast Guard base in Seattle.

The 90,000-square-foot structure, built in 1943, is home to the Coast Guard’s administrative offices, armory and gym. The building had deteriorated over the years, creating an unhealthy environment for those who worked there. Mechanical units were covered in inches of dirt and dust, pigeon guano covered the trusses, and lead paint was blistering off the steel structure and wood catwalk.

Budget constraints meant that a full lead abatement was not an option, so WCP’s team developed a plan to clean the lower levels and remove flaking lead-based paint so that surfaces were prepared to accept encapsulating coatings. Also, the plan included a complete repainting of the ceiling, steel structure and wood catwalk without disturbing the asbestos ceiling panels.

The building was sectioned off into seven parts, and in each sector a safe work platform was constructed above the ceiling of existing offices to within two feet of any horizontal surface and 10 feet of any overhead surface. Then scaffolding was erected in the upper area for access to the entire ceiling by an arm’s length.

Each sector was completely enclosed with shrink wrap and treated as class 1 or 2 asbestos-related work areas. Dust collectors with HEPA filters helped to create negative air pressure to ensure that contaminated air would not escape to other parts of the facility.

After sandblasting was complete and the waste had been collected, bagged and removed from the site, the team was finally able to start painting. It applied two coats of Sherwin-Williams acrylic coating to all substrates — a total of 3,275 gallons of paint.

Ultimately, some 450,000 square feet of surfaces were cleaned and painted, and 176 tons of recycled waste was removed.

With a constant eye on safety and a commitment to training, the unwavering efforts of everyone on the job site resulted in a zero-accident safety record during WCP’s 11,225 hours worked over the course of the year.

WCP met all schedule requirements, coming in on time and on budget.