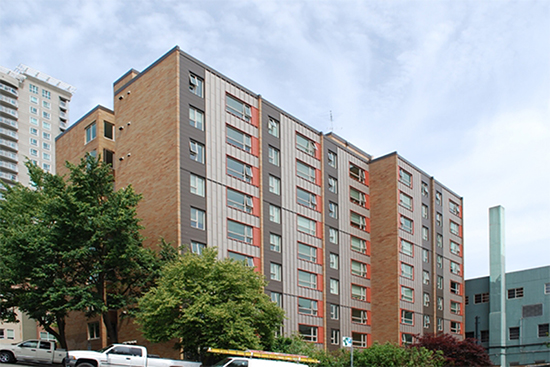 When Bellwether Housing was contemplating buying the Sunset House apartment building on First Avenue in Belltown in 2011, it called on the Rafn Co. to help figure out how to renovate the interior and replace the building envelope — all while the residents in the 82 units continued to live there.

Bringing Rafn in early saved Bellwether time, money and aggravation by providing an in-depth scope of work, price estimates, creative solutions for the exterior cladding, and an understanding of how to work over, under and around the residents while keeping disruptions to a minimum.

This was perhaps the biggest challenge for Rafn. It would have been cost-prohibitive for the owner to relocate the entire population of the building, so the interior work was completed in phases. First, people living in the top two floors were moved to “jump-seat units” on the first two floors. After their units were completed, they moved back upstairs and the next two floors moved downstairs to the temporary units, and so on for all 10 floors.

Clear, consistent and timely communication was key to keeping both residents and construction workers in sync and happy, especially when demolishing and removing the old materials and bringing new materials into the building. In addition to the noisy activities, there were elevator and water service interruptions.

Rafn’s greatest contribution to the project was providing its own on-site design and creation of the exterior cladding. Rafn created an elevated platform in the scaffolding two stories off the ground, where it set up a metal fabrication shop to shape and prepare individual pieces that could be easily and quickly transported to workers to install. This process was significantly more cost-effective and timely than having pieces made off-site.

A great side benefit was that it kept many people working during the recession, while saving the client money and avoiding delays that frequently occur during rehabilitation work.

Bellwether Housing also wanted to install seismic upgrades to the 1980 building during the renovations, and once again Rafn came up with a unique solution. Instead of spraying shotcrete on the interior shear walls — a traditional approach that is also messy and invasive — Rafn installed a unique fiber wrap system that connects floor-to-floor through the floor plates. The system provided the desired seismic enhancement without encroaching on common areas, while preserving aesthetics and limiting disruption to residents.

The project was built to the Evergreen Sustainable Development Standard and includes three important green features: a solar-reflective roof for energy savings and new lighting throughout the building; re-purposed carpet tiles from a nearby building that was being demolished; and AEP Span “cool” colored sidings that have solar-reflective properties.

Ultimately, the owner was able to save enough contingency money to upgrade the back courtyard from an afterthought to a quiet urban oasis.

Rafn’s site-specific safety plan required each subcontractor to develop its own safety plan as well. Throughout the project a senior superintendent not assigned to the project and/or Safety Matters, an independent safety consultant, performed weekly site inspections and developed reports used to ensure worker safety. In the 30,083 worker hours there was only one time-loss injury recorded.