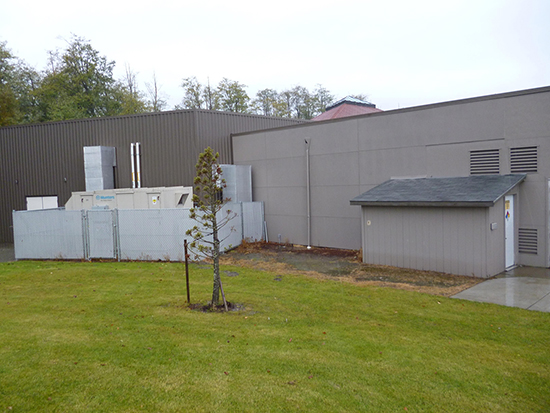 For some time, Metro Parks Tacoma had been calling in Air Systems Engineering regularly to care for the center’s aging mechanical systems. But in July 2011, Air Systems was invited to partner with Johnson Controls Energy Solutions Group to build a new and upgraded energy-efficient mechanical plant — essentially the equivalent of a heart transplant — for the center.

The three-week shutdown to upgrade the mechanical plant was a coordination challenge. There was a lot of work to do and much of it needed to be done in a small boiler room in the extreme heat of the summer.

Air Systems realized early on that the pool’s existing air-to-air dehumidification unit could be modified by adding a new air-to-water heat pump that could preheat make-up water for the pool. This constant energy source would be much more valuable as a heat source for the main system water loop, creating a more favorable operating cost-benefit ratio, so it was added at no additional cost to the client.

One of the challenges in this project was the diligent coordination of people and time, as there would need to be scheduled interruptions for no-heat shutdowns and safe work practices around the public, including the need for warm pools and hot showers when local schools used them in early September. To accommodate these needs, Air Systems performed the demolition, poured the concrete pads and set the major equipment, then concurrently performed the change-out of 17 air-handler coils, plus all of the electrical wiring and motors.

The boilers were designed with a dual-fuel feature, able to operate on either propane or natural gas. Two 1,000-gallon propane and natural gas tanks were originally supposed to be installed in a fenced area behind the facility, but Metro Parks was wary that such an enclosure might be an eyesore as well as a liability to the adjacent outdoor water park. So the decision was made to bury the tanks.

Once the old boilers were gone, the team realized that if it expedited the permitting and installation of the new tanks, it would be able to stay on schedule. Once installed, the boilers were fired up on a Friday afternoon and the 60,000-gallon pool was 85 degrees by Sunday.

The design-build process for this project allowed Air Systems to adapt and consult quickly with the engineers during job site challenges.

With all of the safety measures in place and executed, plus additional oversight by the job superintendent, there were no incidents or injuries during the 1,355 hours worked on the project.