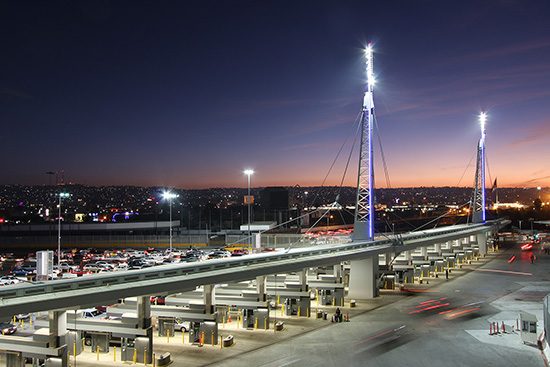 Photo courtesy of Magnusson Klemencic Associates [enlarge]
MKA used a cable-stay system to support the long-span roof over the inspection booths at the San Ysidro Land Port of Entry. 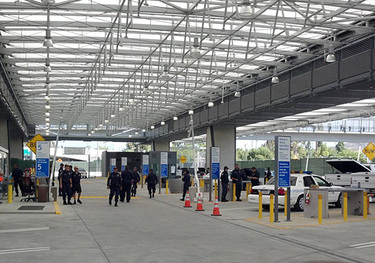 Photo courtesy of GSA
This inspection area was daylit to reduce the need for artificial lighting.

Modernization of the San Ysidro Land Port of Entry, the Western Hemisphere’s busiest land port, is a project unlike anything attempted anywhere in the world.

These components had to fit together, all while meeting the owner’s requirement to create a model port that sets new standards of efficiency, security, aesthetics and sustainability.

These unprecedented challenges were met with the creation of two first-ever systems, each with multiple innovative components:

• Net-zero nonpotable water system: Five separate strategies combine to eliminate the need for “outside” water for nonpotable purposes, saving the U.S. General Services Administration 20 million gallons per year. The system includes an on-site membrane bioreactor to transform water from “black” to clean, and can provide the port of entry with total water self-sufficiency in the event of an emergency or terrorist event.

The invention of a cable “quad-stay” support system brings elegance and allows the very-long-span roof to be just 2 feet deep.

Protected by the most advanced security approach in the entire U.S. system, the port’s signature mix of structure and architecture creates a welcoming first impression for visitors to the U.S. The modernization project also brings the potential to inject billions into the economies of U.S. and Mexico.

Delivered on time and budget, the San Ysidro Land Port of Entry is a model for not only future ports, but projects of all kinds.