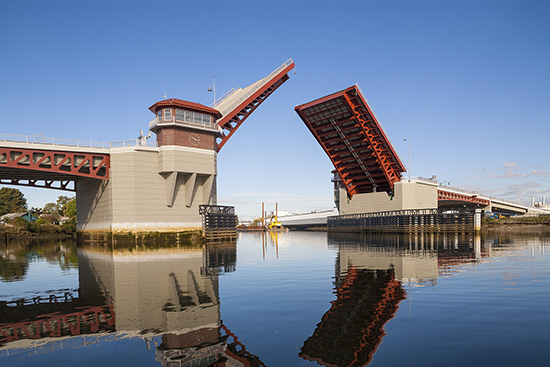 The original South Park Bridge, built in 1931, was a double-leaf bascule bridge listed on the National Historic Register and designated a King County landmark.

The 1,045-foot-long bridge connected Seattle neighborhoods across the Duwamish Waterway, a navigable channel used for commercial, industrial and recreational purposes.

The original bridge was deemed seismically vulnerable due to the original foundation piles not penetrating through a deep layer of liquefiable soil, as well as the concrete structure being weakened by cumulative damage from several previous earthquakes. The tilting and cracking of the main piers meant the bridge was susceptible to reactive movement as the bascule spans opened and closed.

In the last years of operation the bridge required extensive maintenance and operations to maintain alignment of the movable spans and machinery. The bridge was ultimately classified structurally deficient and functionally obsolete and received a sufficiency rating of 4 out of 100 prior to closure to roadway traffic in 2010.

King County Department of Transportation selected HNTB as the final design consultant for the South Park Bridge replacement. The primary objective of design was a bascule bridge that would sustain minimal damage and remain operational in the aftermath of a minor seismic event and that would experience only moderate, repairable damage to make the bridge functional within days following a major earthquake.

Achieving this objective within the context of a movable span with strict alignment requirements for reliable operation adds several degrees of difficulty for design and construction. Seismic performance requirements were satisfied by implementing several innovative design features, including sunken caisson foundations, isolated trunnion frames and a collapsible center joint on the lift spans.

The new South Park Bridge is more than a bridge. It reconnects communities and businesses on both sides of the river, improves freight mobility and provides better regional access to downtown Seattle and the adjacent industrial area.

The bridge has restored a reliable link to the South Park community. The community can take pride in a landmark drawbridge that is safe, preserves the art and historical features of the old bridge and improves the marine and land-based environment of the surrounding areas.