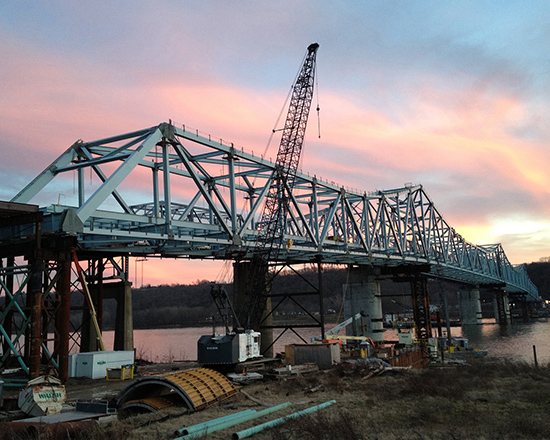 Photo courtesy of Buckland & Taylor [enlarge]
The replacement was built on temporary piers alongside the old bridge, then slid into place after the old superstructure was demolished.

The old Milton-Madison Bridge, built across the Ohio River in 1929, was narrow, deteriorating and functionally obsolete, but it was a vital link to the nearby communities.

The challenge for the bid design team was finding an innovative solution that eliminated the need for a year-long bridge closure and also reduced construction risk associated with the schedule.

The team developed a solution so the existing bridge remained open to traffic during the pier rehabilitation, while the new bridge superstructure was constructed alongside on temporary piers. Traffic was then diverted onto the new structure, and the old superstructure and pier tops were demolished. Temporary access ramps allowed the new approaches to be completely built in their final position.

In early 2014, the bridge was closed for a few days and the entire new superstructure slid into final position. The Milton-Madison Bridge is currently the longest truss slide in North American history.