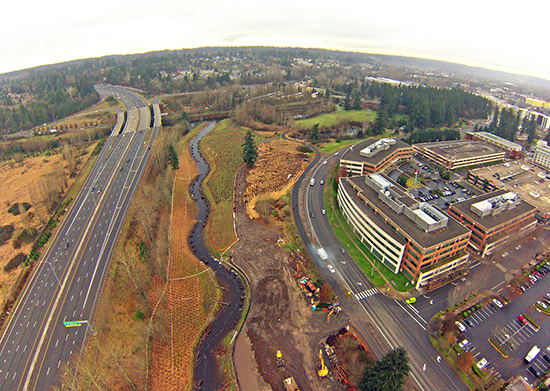 Nearly a mile of the lower reach of Bear Creek in Redmond was identified as a high-priority restoration because it is a critical migration route for some of the last wild salmon stocks in the Lake Washington system. In 2008, the Washington State Department of Transportation provided funding for the Phase 2 restoration as mitigation for state Route 520, and the final permitting and design was led by David Evans and Associates.

As part of the 404 permitting evaluation for cultural resources on the site, artifacts were found dating up to 12,000 years ago. This delayed the design, permitting and construction until the site could be evaluated.

The site is significant because it is one of the first archaeologically excavated sites in Western Washington that dates to the end of the Ice Age. At that time, the environment was undergoing tremendous change and early Native American communities migrated along coastal and inland routes south of large continental glaciers. This archaeological discovery posed larger questions about social values where salmon habitat restoration conflicted with the preservation of cultural resources.

Wetlands were designed as part of the project and were hydraulically connected with Bear Creek. Portions of remnant channel were repurposed as “backwater channels” for refuge habitat critical to juvenile salmonids. This increased the in-stream habitat by 1,335 feet.

Fifteen hundred pieces of large, woody debris were installed for pool formation and bank protection. Over 3,000 feet of trail was realigned.

The outcome provides lessons that can be applied to engineering for future projects. DEA worked with the city of Redmond, WSDOT, Native American tribes and the USACE to avoid and minimize impacts to the cultural resources by realigning the stream and designing bank protection to protect the resource area. The cultural resource was preserved by maintaining the floodplain above the geological stratum with the most artifacts.

The work was phased over three separate construction packages to accommodate field investigation and artifact recovery while design moved forward to meet requirements for completion by 2014.