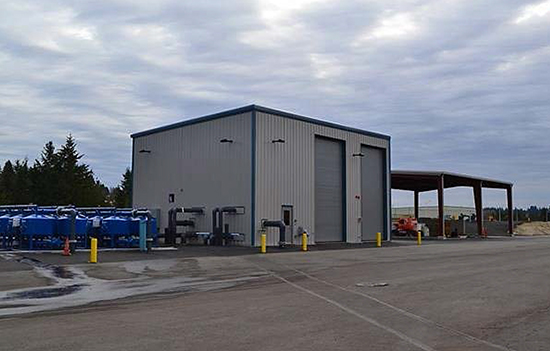 Nearly 130 million board feet of logs move through the Port of Olympia’s marine terminal every year. The majority of this 65-acre site is devoted to 25-foot-high stacks of logs, log debarkers and immense log-loading machines.

Every log that moves through the port leaves behind bark and other organic material. This material accumulates and is washed into south Puget Sound, where it is consumed by bacteria and in the process depletes the oxygen supply in the water.

When Herrera began working with the Port of Olympia, the port had a clear goal: Design a system to treat their stormwater and make sure the system is flexible enough to meet changing demands.

At the time of design there were no existing successful log yard treatments for the pollutants found at this site. Herrera designed a 3.25-acre stormwater treatment facility that will meet the state’s benchmark values.

The modular and adaptable design provides the port with flexibility for reducing operating costs should their treatment needs change. The treatment facility design incorporated wastewater treatment technologies to treat highly variable stormwater and used relatively inexpensive pilot testing to guide the design. Gallon for gallon, the system will be less expensive than other technologies, including a passive treatment system originally envisioned, yet without the concerns of long-term reliability or consistency.

The port is now acknowledged by regulators, the community and by other ports as being innovative, progressive and leading the way in protecting Puget Sound.

As Gov. Jay Inslee said at the project’s ribbon cutting, “I’m here on behalf of my three grandchildren because they’re going to have a shot at a clean Puget Sound because of the leadership of the people associated with the port.”