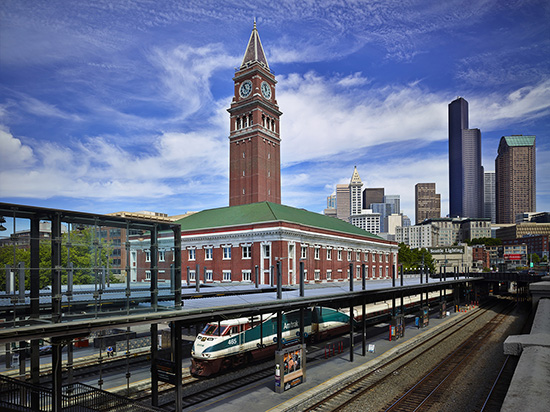 Photo courtesy of Hart Crowser [enlarge]
King Street Station was one of the first projects in downtown Seattle to install a geothermal well field and heat pumps.

But there was a problem. Its landmark 245-foot-tall clock tower had already been damaged by an earthquake and would not survive another major shakeup. The seismic design loads and poor condition of the structure required adding 1,345 tons of steel within the existing structure.

Much has changed since 1906, such as the need for sustainability. The requirement of a LEED silver certificate was surpassed by the design, and the building achieved LEED platinum certification.

Hart Crowser recommended the use of geothermal heating and cooling. This was one of the first projects in downtown Seattle to install a geothermal well field and heat pumps to reduce the building’s energy consumption.

Hart Crowser also performed geophysical testing to “see” through the ground and identify the toe of the existing timber piles supporting King Street Station. This eliminated the need for expensive and disruptive ground improvement that was recommended by a previous geotechnical consultant. This alone saved the city of Seattle half a million dollars.