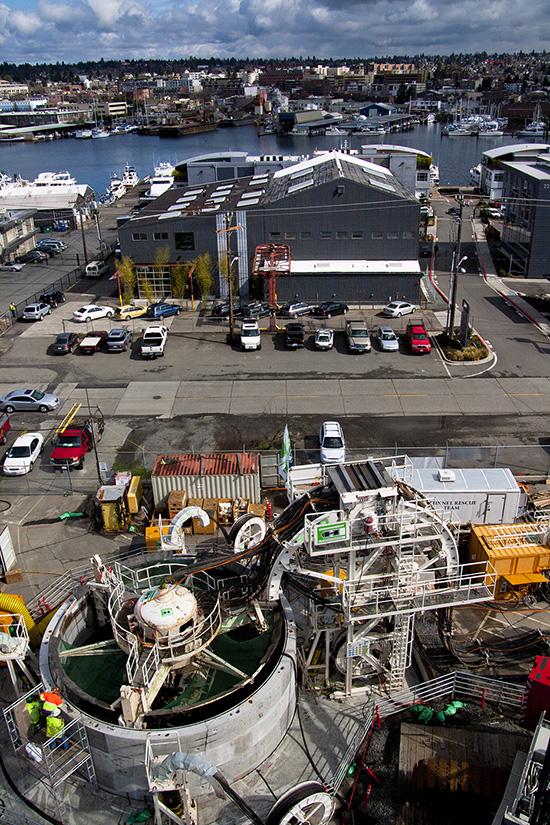 
What do you do with the last two segments of historic wood stave pipeline in the King County wastewater collection system? That was the question when Tetra Tech began working with King County on the Ballard Siphon replacement project.

The original wood siphons were put into service in 1935 beneath the Lake Washington Ship Canal. They carry up to 60 million gallons per day of sewage from North Seattle to the West Point Treatment Plant, so the siphon pipes were a critically important piece of King County’s infrastructure.

Sonar profiling of the pipes had shown signs of deformation but further testing, using graduated sized mandrel pigs, found the existing wood pipes were in sufficient condition to reuse by lining each siphon with new HDPE pipe, butt fusion welded to make them waterproof.

A new parallel 84-inch siphon provides additional capacity (bringing the total to 83 million gallons per day). This will reduce combined sewer overflows into the Lake Washington Ship Canal and eliminate the potential single point failure mode if one of the siphons were out of service.

Tetra Tech was the lead consulting engineer on the project from the initial alternatives analysis through final design. Subconsultants included Staheli Trenchless Consultants and Landau Associates.

The project involved the first use in North America of the Herrenknecht AG vertical shaft machine, a robotically controlled tunneling machine that operates within a small construction footprint, without the need for dewatering, in mixed and difficult soil conditions. General contractor J.W. Fowler used the vertical shaft machine to construct the 157-foot-deep launch portal for the earth pressure balance machine used to mine the nearly 2,000 linear foot tunnel 60 feet beneath the Lake Washington Ship Canal.

The tunnel shaft sites are both located in built-out areas in the Ballard and Interbay marine industrial zones along major arterials. The initial site offered for the launch portal was withdrawn by the property owner, necessitating a change in approach.

Throughout the design phase, the project team remained flexible and quickly adapted its design as needed to respond to the concerns of the neighbors, the traveling public, and various stakeholders.

On the Ballard side of the Ship Canal, the new tunnel and re-lined wood siphons were reconnected to a 12-foot diameter vintage brick sewer. The top of the brick arch was removed and supporting concrete walls were built outside the pipe to take the structural load and avoid damaging the vintage sewage tunnel. After making the connection precast top beams shaped to match the brick arch were placed. Fill above the top beams included foam blocks to reduce structural loading and support of the arterial roadway above.