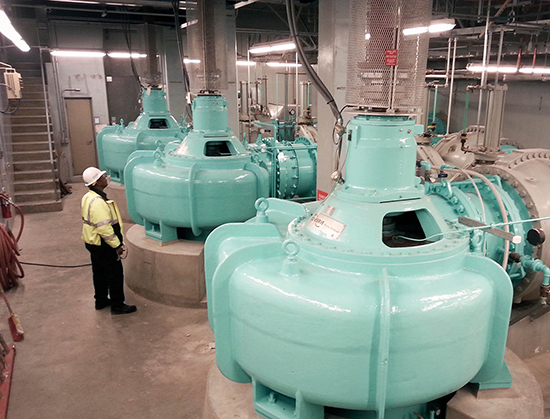 Photo courtesy of Parametrix [enlarge]
An upgrade to the Interbay Pump Station was completed more than seven months ahead of schedule.

It is the county’s highest-flow conveyance system pump station and handles most of the combined sewage/stormwater collected from within Seattle city limits, including all of downtown. It is a critical part of the wastewater system.

Prior to this upgrade, much of the equipment was nearing 50 years old and its electric lead pump lacked standby power, presenting significant operation risks.

Improvements were carefully planned and sequenced. Work involved installing a new generator and electrical system, replacing the oldest pump (which was part of the original 1960s construction), then replacing the other two pumps and performing other upgrades. The pump station had to remain fully operational at all times during the project.

The station was converted to three premium-efficiency, 800-horsepower medium-voltage motors on variable frequency drives. Noise and odor control systems were also added, along with replacement of most support equipment.

The work was planned in close partnership with King County operations staff, as they needed to understand exactly how the project would occur so that they could continue their necessary activities throughout construction. The project also added system flow-control and flow-limiting software that allows operators to minimize combined sewer overflow (CSO) events.

The upgrade was completed 230 days ahead of schedule, 20 percent under budget, and at the lowest cost per gallon of capacity of any recent major station upgrade.

The pump station now operates with an increased firm capacity of 133 million gallons per day, has EPA Class 1 Reliability, operates 35 percent more efficiently, and has eliminated the majority of its greenhouse gas emissions. The station also enables the county to better control flow and storage in its conveyance system to reach its continued goal of reducing CSO events.