It’s not as contradictory as it sounds! It took 600 of them to pull off GLY’s two massive mat foundation pours in downtown Bellevue this winter: carpenters, laborers, finishers, traffic controllers, pump truck operators, concrete truck drivers, testing engineers and inspectors.

We also had 50 company employees volunteer to make countless hikes up and down nine flights of engineered stairs, into the deep hole, to deliver water and snacks to keep workers energized.

Over 100 visitors came to the project site at all hours of the day to witness the record-breaking work — the largest continuous mat pours in Washington to date — and more put off their shopping for a few minutes to take advantage of a viewing window down into the action.

Those are just some of the numbers for the actual pour days. It’s almost impossible to count how many people participated in the planning and coordination that allowed it to occur safely, and humbling to step back and consider the extraordinary level of detail involved to ensure its quality.

Photos from GLY [enlarge]
GLY workers fan out across the project’s mat foundation, roughly the size of a football field.

Before a single yard of concrete was poured, GLY, along with Kemper Development Co. and lead design firm Sclater Architects, began attending regular meetings this summer with the city of Bellevue to clarify regulations, establish expectations, and plan ahead for a construction activity of this magnitude.

Safety was priority No. 1, with minimizing impacts to the surrounding community of residents and businesses a close second.

Street closures were required to accommodate the seven concrete pump trucks and testing areas stationed around the site, as well as maintain the staging, delivery and exiting of more than 80 trucks delivering concrete from five different local plants.

These activities were carefully planned, down to the minute, and information communicated to the public via the city’s website and a joint press release from Kemper, GLY and Sclater. Police officers, together with GLY traffic control personnel, ensured safe passage for motorists and pedestrians in traffic lanes and crosswalks adjacent to the site.

As for protecting the workers, and ensuring operations continued smoothly and as efficiently as possible throughout the two 24-hour-plus continuous concrete pours, multiple safeguards were in place. GLY’s superintendents and foremen meticulously studied manpower schemes to finalize a plan that dedicated appropriate personnel. 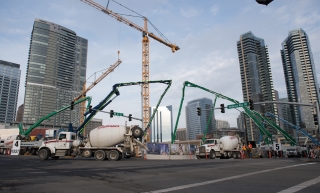 If things went wrong … a towing company remained on-call in the event of a concrete truck breaking down. The pumping company, Ralph’s Concrete Pumping, had a back-up truck on site for each of the three different sized pump trucks being used.

GLY’s in-house “McGyver” was there as well, just generally improving everyone’s mood knowing any tool or piece of equipment known to man could be fixed if needed.

Then there’s planning and designing the foundation itself. It supports a $1.2 billion expansion to The Bellevue Collection. There is underground parking, a retail podium, and two separate highrises — one a 41-story hotel and residence tower and the other a 31-story office tower. The size of the foundation is determined by the size and weight of these designs, the soil bearing capacity, and the forces on the buildings during severe windstorms or an earthquake.

This process took months; it’s not as simple as one type of concrete for the entire mat foundation. The thickness varied due to factors mentioned above. And when it comes to mass concrete, contractors must know about maximum concrete temperatures (chemical heat caused by setting it) and temperature differentials. 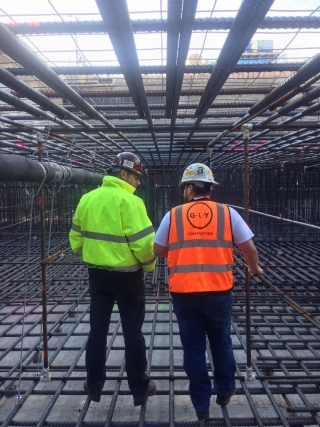 A thermal control plan can consist of pre-installed pipes that circulate chilled water through the concrete to slow the curing process. The most famous example of this is the Hoover Dam. According to the U.S. Department of the Interior Bureau of Reclamation, there are more than 582 miles of 1-inch steel pipe embedded in the dam’s 3.25 million cubic yards of concrete. (Contrary to urban legend, the dam is not still curing; cooling was complete in March 1935, nearly two years after the first concrete was placed.)

For the Lincoln Square Expansion foundation, the team instead sought to develop a variety of mix designs to limit the max internal temperature and prevent the differential between the concrete core and surface. A low heat mix limits the quantity of cement to the smallest amount possible, and uses low thermal expansion aggregates such as limestone, granite or basalt. Reinforcing steel, or rebar, is installed prior to the concrete pour to strengthen and hold the concrete in tension.

The team also used insulated concrete blankets and thermal monitoring (pre-pour installed thermometers with long cords) to prevent heat loss, maintaining a more constant temperature differential from core to surface. These blankets remained in place for over a week.

In other words, a whole lot of chemistry, physics and math — and unadulterated love of concrete — literally makes or breaks the foundation. To date, there are 38 different mixes and counting on this project, six designed specifically for the mat pours, and each painstakingly developed, lab-tested and submitted for city approval.

Even after thousands of years, builders are still inventing different ways to use concrete. We aim to make it stronger, more beautiful and quicker to place. But we need the integrated collaboration with our owner partners, design peers, community officials, and countless other hardworking, intelligent people to truly get it right. When we do, it can last forever.

Melanie Cochrun is GLY’s marketing manager. She is a Certified Professional Services Marketer and lover of concrete projects, large and small.