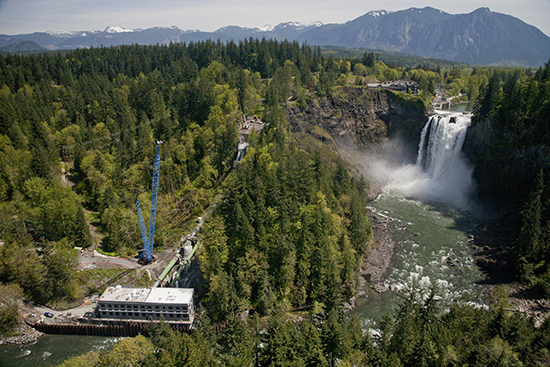 Puget Sound Energy’s Snoqualmie Falls hydropower plant is one of the oldest in the U.S., built in 1899.

The first powerhouse is encased in bedrock 260 feet beneath the surface and was the world’s first completely underground power plant. The second powerhouse, a quarter-mile downstream on the north side of the falls, was built in 1910 and expanded in 1957.

General contractor Barnard designed and built updates so that PSE could relicense the facility.

Challenges not faced in the 1800s spanned the gamut, from the existence of the now famous lodge perched above plant two’s intake to the constant stream of roughly 2 million tourists per year. Barnard also dealt with calendar limitations for river work during fish migration and two 50-year floods.

Work on the 1899 underground powerhouse involved reconstruction of the intake and penstock, refurbishing four generators and replacing a fifth. Other work enlarged the plant’s cavern and original 270-foot-deep shaft, and replaced the elevator.

An interpretive center was built to house one of the original generators that was replaced. The original concrete, which has supported the generators for well over 100 years, is still in place.

On the other side of the river, work on plant two involved construction of a new river intake just below the lodge, new penstocks and a new powerhouse with 12.5-megawatt turbine generator. Crews also upsized and relined the flowline tunnel that goes under the lodge.

The new river intakes on both sides required large concrete footings and precise walls to support the eight gates that weigh up to 33 tons. All were built and installed within tight tolerances.

Barnard cooled the concrete to mimic ground temperature to reduce cracking and other heat issues. Loads on ready-mix trucks were injected with liquid nitrogen to cool them. It took about 10 minutes to chill a full truck to about 50 degrees, requiring more trucks for pours.

More than 32,000 cubic yards of concrete in more than 25 mix designs were used for the project.