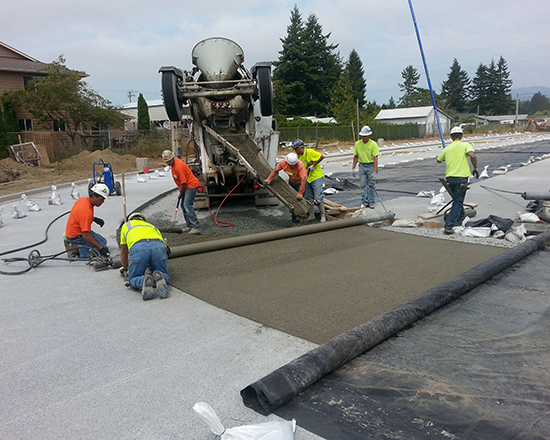 Cascade Middle School has been operating for nearly 60 years in Sedro-Woolley and needed upgrades to its structures and grounds.

As part of a $20 million renovation, the school district identified infiltration as the best way to control stormwater runoff. After evaluating several methods, officials decided on permeable pavement because of the large amount of infiltration area beneath the pavement.

Pervious concrete was selected for its durability and structural integrity, allowing it to handle heavy buses. Officials also liked pervious concrete for its light, reflective surface that helps reduce the heat-island effect.

Another benefit of an infiltration system is no need to build conventional stormwater system components such as catch basins, pipes and vaults.

About 3,500 cubic yards of pervious concrete was used on nearly 4 acres of the site. The pavement is 4 inches thick for sidewalks, 6 inches for parking areas and 8 inches for the bus lane. It was strengthened with admixtures and fiber mesh.

The project earned credits under the Washington Sustainable Schools Protocol, the green building standard for schools in Washington. Teachers are using the pavement to educate students about pollutant removal, infiltration rates and stormwater management.