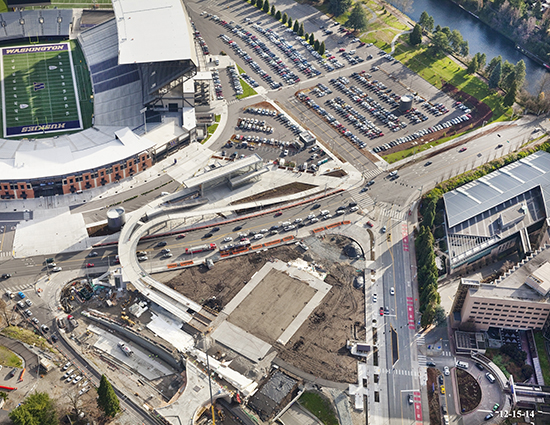 Its span hinges divide the bridge into three segments. The inside and outside curves are cast-in-place, post-tensioned concrete single-cell box girders that transition to a three-cell box where the curves converge.

Post-tensioning was chosen to allow a shallow section of the bridge to meet vertical clearance requirements. It also produced a high-level architectural finish without the typical cracking associated with reinforced concrete bridges.

Crews had to form and construct the bridge over a main arterial road without interrupting traffic.

Design and construction of the project pushed the limits for use of post-tensioning in highly curved bridges, demonstrating that durable, low-maintenance, high-aesthetic post-tensioned bridges are a viable option for transportation projects.