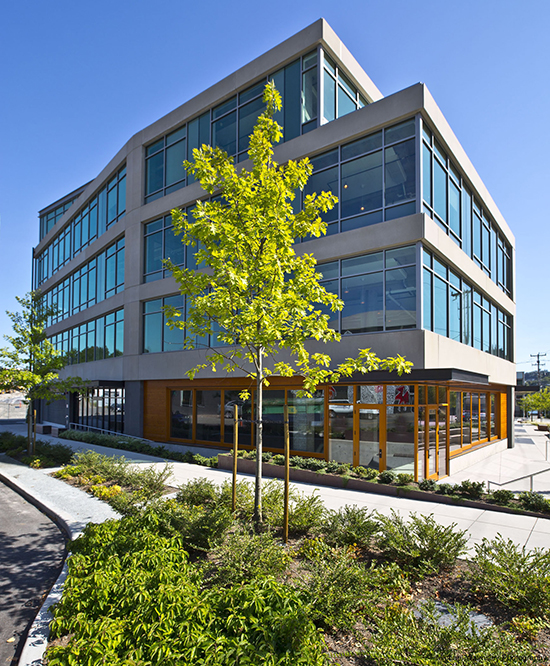 Photo courtesy of WACA
Wide and shallow concrete beams run from the center of the building to the exterior, reducing the need for sunlight-blocking columns.

Concrete was vital to the success of this 225,000-square-foot Fremont office building that uses cutting-edge sustainable building technologies and is part of Seattle’s Deep Green pilot program.

Stone34, which opened last summer, is designed to capture at least half of on-site stormwater and use 75 percent less energy and water than comparable office buildings. It achieved LEED platinum certification and is designed to meet at least 60 percent of the Living Building Challenge guidelines.

Stone34 has a 76,000-gallon container on the roof that collects rainwater to reuse throughout the building, while more than 17,000 cubic feet of underground cisterns and detention vaults store excess stormwater. A post-tensioned concrete framing system supports this massive water collection system, as well as an extensive green roof and accessible deck.

The building’s post-tensioned concrete slab system maximizes the reach of sunlight throughout the interior. Wide and shallow concrete beams run from the center of the building to the exterior column line. These beams cut down on the need for vertical columns that would block views or interrupt sunlight. With no perimeter beams, the windows were extended to the undersides of the slabs, allowing greater light infiltration.

Office ceilings were left exposed, which enhances natural daylight and reduced the amount of construction materials.

The structural engineer worked with the developer and general contractor early on, and used Revit and building information modeling to save time and minimize wasted materials and resources.

The building’s shear wall layout consists of simple straight walls, which eliminate the need for a central core, making for cheaper formwork and faster set times. This design also eliminated most of the pilasters in the basement, which allowed walls to be constructed of shotcrete — a cheaper and less resource-intensive solution than traditional concrete.

Precast planks were used for the detention vault lids and 7-inch-thick slabs were used to reduce the building’s seismic mass.