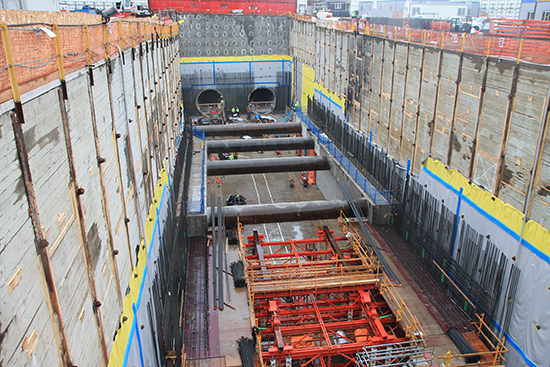 The Sound Transit light rail line between Capitol Hill and Husky Stadium is expected to open in fall 2016.

Capitol Hill Station houses most of the support machinery for the power, communication and ventilation of the tunnels in both directions. It also will be a passenger stop, where Sound Transit estimates 14,000 riders will board daily by 2030.

Construction of the station involved 3.5-foot-thick exterior walls, reinforced concrete strut members spanning the width of the station that are just over 3 feet and 5.5 feet in diameter, and suspended slabs up to 4 feet thick.

The below-ground “station box” or platform area is where passengers will catch their trains. Walls in this area are exposed concrete, and the entrances to the station include reveals of exposed concrete to contrast with the tile and metal panel finishes.

The challenge for the station box was the open area without intermediate decks, about 51 feet from top to bottom. Crews used an out-of-the-box concrete forming system with collapsible steel trusses that spanned the 45-foot width of the station box.

The truss system sat on a set of rails with rollers on it, and once the concrete was poured and started curing, workers disassembled the system and slid it to the next section to prepare for the next pour — up to 40 linear feet at a time.

The result was a nice finish for exposed concrete walls and fewer construction joints.

With such large sections, and a stringent temperature requirement, mass concrete mitigation was important. Using methods such as water circulation post-cooling and liquid nitrogen pre-cooling, crews kept concrete temperatures below 145 degrees and changes in temperatures to less than 35 degrees.

Instead of typical foam build-up, designers opted for cellular concrete backfill for voids in the structure. This lightweight specialty concrete was batched and placed on site, and made up nearly 1,400 cubic yards of the total.

The overall station used nearly 29,000 cubic yards of concrete and more than 7.3 million pounds of rebar.