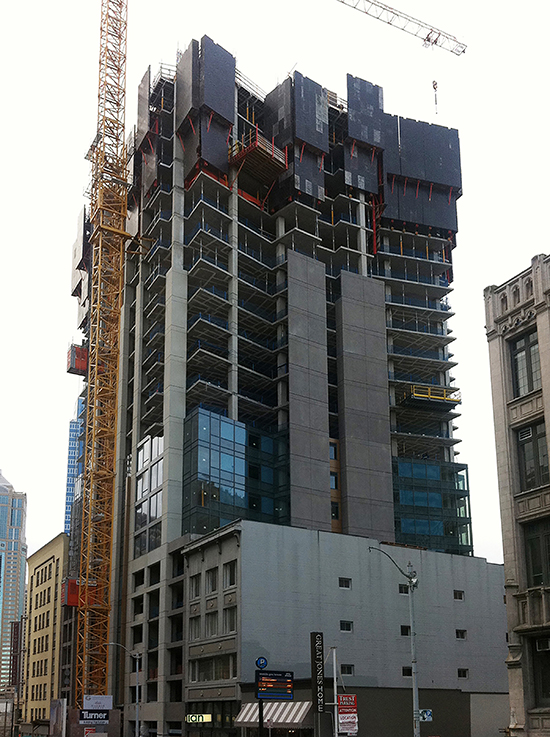 Photo courtesy of WACA
Viktoria was built with a two-way post-tensioned slab system that eliminated all internal columns.

Located in downtown Seattle near Pike Place Market, Viktoria is a 25-story tower with 249 upscale apartments.

With panoramic views of the city and water, the entire 25th floor is devoted to socially focused amenities. A butterfly roof cantilevers more than 20 feet from the enclosed portion of the sky lounge, and features an evergreen tree that pierces the roof through an oculus.

The building’s structural system consists of cast-in-place concrete with post-tensioned floor slabs and a shear wall core for seismic and wind resistance. Structural member sizes were minimized through the use of high-strength concrete and reinforcing bar, which also reduced total concrete volume and steel tonnage.

From the inception of the project, the owner and architect desired a contemporary urban environment with spacious open layouts to maximize usable square footage. The structural engineer responded with an innovative solution that eliminated all internal columns.

That solution was a two-way post-tensioned slab system. By thickening the slab to 16 inches for a distance of 6 feet around the core, creating a large “drophead,” spans of nearly 40 feet from the core to the exterior glass were made. This eliminated all internal columns in all units.

With no interior columns, the majority of the building’s dead load was supported by the core. This significantly reduced the net uplift forces at the core from wind and seismic loads. As a result, core wall reinforcing quantities dropped by over 12 percent. This rebar savings more than compensated for the drophead costs, creating a net savings to the project.

The drophead eliminated the need for transfer beams, which would have been required to relocate interior columns as they pass through the lower retail, lobby and parking levels.

The combination of post-tensioning and the drophead around the core created a more uniform and consistent deflection distribution. Thus, the slabs are less susceptible to serviceability problems.

The use of post-tensioned concrete allowed for 8.5-inch slabs, despite the ultra-long spans. This minimized structural mass and seismic forces, benefiting the columns, core walls and foundations.