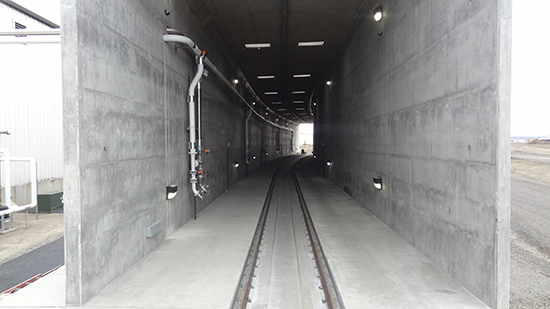 The Philadelphia Macaroni rail receiving building is a 300-foot-long and 27-foot-tall cast-in-place above-ground tunnel that can accommodate up to five rail cars for unloading. It is the first step that the owner uses to make pasta.

The covered spur is used to unload rail cars filled with semolina flour in a semi-controlled environment. The cargo is transported about 350 feet away into silos through a complex network of pipes and compressed air. Due to the flour dust and moisture generated from daily operations, the owner required electrical, communications and control systems to be contained within the concrete walls in lieu of surface mounting.

The project was originally designed with precast concrete wall and roof panels. While the concept was possible, constructability was problematic due to several issues.

The first concern was connecting as many as 15 rows of conduit that were to be set into the 60 precast panels. That would have required the contractor to align the many cast-in conduit components while erecting the precast panels. With 56 panel joints containing these connections, the likelihood of multiple conduit connections being misaligned and unusable was inevitable.

The second concern was the lack of access on the site. The west side of the tunnel is on railroad property with no access and the east side has about 25 feet of space, severely limiting the size of a crane and making erection of precast panels extremely inefficient and expensive.

Divcon proposed using cast-in-place concrete in lieu of precast to eliminate complexities of the original design. This allowed all conduit, electrical panels and junction boxes to be cast directly in the wall and soffit concrete.

Using cast-in-place concrete also reduced the size of the crane needed to the point that access was no longer an issue.

The result was a superior concrete structure with lower construction costs, as well as lower operating and maintenance costs.