A new water treatment system at the U.S. Department of Energy’s Hanford nuclear cleanup project is a two-part success for the environment: It is reducing large areas of contamination in the groundwater beneath the site, while its sustainable design is reducing energy use and waste generation.

“This is one of the largest, most complex groundwater treatment facilities of all the DOE nuclear cleanup projects. Both its construction and operations are protective of the environment,” said Bob Popielarczyk, CH2M Hill vice president of soil and groundwater remediation.

The 200 West Pump and Treat System was designed and constructed by DOE contractor CH2M Hill Plateau Remediation Co. to remove contamination from water beneath the surface of a 5-square-mile area at the Hanford Site. The 69,500-square-foot complex was also designed to achieve LEED standards. 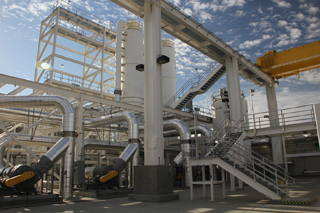 Photos courtesy of DOE [enlarge]
The system is decontaminating water that flows beneath the Hanford Site.

The system is treating contamination that resulted from decades of plutonium production when the site was in operation for the nation’s defense from the 1940s to the 1980s. During its plutonium production years as much as 450 billion gallons of water were disposed to the ground. While most of it was uncontaminated cooling water, there were some contaminated liquid waste streams.

The system began operations this summer by bringing together a network of technologies to do just as its name suggests: pump and treat water laced with contamination.

The project was completed on schedule (from design to operation in less than three years) and $41 million under budget. With a capacity to treat approximately 1 billion gallons of groundwater per year, the system has more than doubled the capacity to treat contaminated groundwater at the Hanford Site.

The system is capable of removing more types of radioactive and chemical contaminants than any other facility of its type in the DOE complex. This is accomplished through a combination of technologies including carbon tetrachloride, nitrates, technicium-99 and uranium. Contaminated groundwater is removed from the soil via a network of extraction wells and transferred to the main treatment facilities, where it filters through a series of treatment technologies: 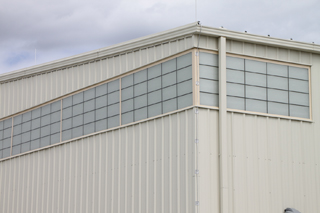 [enlarge]
Translucent panels on the buildings reduce the need for interior lighting.

The treated water is reinjected into the aquifer via wells, which helps create a barrier to contain contamination and push contaminated groundwater toward the extraction wells.

The system is designed to operate at a rate of 2,500 gallons per minute and will treat approximately 270 billion gallons of contaminated groundwater and remove thousands of pounds of contamination.

CH2M Hill managed the project with adherence to stringent environmental, health and safety regulations to protect the workforce and the environment. There were approximately 500 people working on the project at all times during the three-year design and construction period.

“Our crews worked over 1 million hours safely with no days of work lost due to injury,” said Kent Dorr, CH2M Hill vice president for engineering, project and construction. “What these workers accomplished, completing construction in less than 15 months and beginning operations on time and under budget, doesn’t happen by accident — it takes team work.” 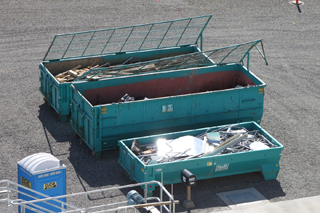 [enlarge]
Waste was segregated during construction to be reused or recycled.

The system’s largest building, the biological process building, achieved LEED gold certification — a first for an industrial facility at a DOE nuclear cleanup site. The building’s efficient design is expected to result in an energy cost savings of more than 70 percent over its life.

“Designing and constructing a high-performance green process facility is a long-term commitment to sustainability for the Hanford Site,” Dorr said. “Achieving LEED certification required diligence on the part of the entire project team because the focus is on energy use and recycling goals for both construction and operation.”

• More than 75 percent of construction waste was diverted from landfills

• 420 tons of recycled concrete was used

• 9 tons of paper/cardboard was recycled

• 42 tons of metal was recycled

• 170-plus translucent panels reduce the need for interior lighting

Sustainable construction required diligence by the contractor to focus on energy and materials use during planning and construction, as well as planning ahead for operations of the facility. Materials were carefully segregated for reuse or recycling.

Projects like the 200 West Pump and Treat system are incorporating sustainability to preserve environmental resources at the DOE Hanford Site and lessons learned can be shared with sites facing similar challenges. The facility is expandable to treat 3,750 gallons per minute and to include treatment of uranium, another contaminant of concern at the Hanford Site. During the 25-year design life of the facility, more than 4 million pounds of contaminants will be removed from the groundwater, cleaning up the aquifer for future generations.

Find out more about the project by visiting www.hanford.gov and www.plateauremediation.hanford.gov.

Maren Disney is a communications specialist with the CH2M Hill Plateau Remediation Co., one of the largest contractors responsible for environmental cleanup at the Hanford Site. She holds a master’s degree in rhetoric and technical communication from Eastern Washington University.