The renewable energy market offers an exciting mix of established and emerging technologies which harness the power of the sun, wind and water. What about the inherent energy of wastewater?

Estimates show that wastewater contains up to 10 times the energy needed to treat it — providing a network of distributed, decentralized energy sources that are already constructed and piped up.

WWTPs are responsible for approximately 1.5 percent of total U.S. energy consumption. For some municipalities, this translates to 30 percent to 40 percent of the total electricity bill. 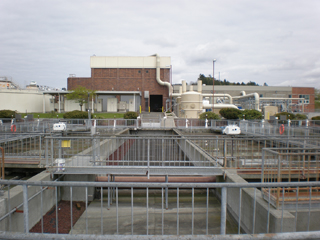 Since the need for wastewater treatment will only increase with population growth, closing the energy loop is rapidly becoming a primary focus of many municipalities.

One of the easiest and most common ways to generate power at a WWTP is through anaerobic digestion.

When a cohort of bacteria found in WWTPs is fed the “solids” component of wastewater correctly, they produce methane gas. Bacteria that are fed a combination of the biosolids and other organic material — such as grease trap waste (a process referred to as co-digestion) — generate even more gas. Methane is natural gas, and is usable in microturbines, boilers and other technologies to generate heat and electricity.

WWTPs can also be sources of hydropower, capturing and redistributing the energy produced as water circulates throughout a plant. Some cities use the heat in wastewater much like a geothermal heat pump, resulting in billions of bulk gallons that are cool in the summer and warm in the winter. 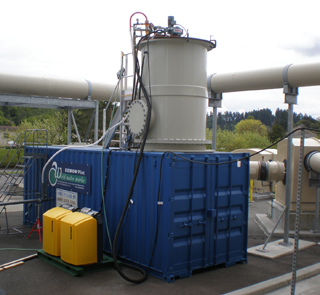 [enlarge]
The Demon (de-ammonification) nitrogen reduction equipment used in a current pilot study efficiently removes nitrogen from wastewater before the treated effluent is discharged to the environment.

A national leader in renewable energy and water/wastewater construction, Mortenson Construction is the general contractor/construction manager responsible for the expansion of the Chambers Creek plant. The project will increase the plant’s production of digested methane gas, which is one of the most effective and efficient ways for new or upgraded WWTPs to generate energy for communities.

Although the upgrades are designed to meet county growth needs through 2025, the facility will be built to accommodate expansion beyond that. Without the expansion, the plant would reach its treatment capacity by 2016.

The expansion adds two anaerobic digesters, for a total of five, and new digester gas-fueled steam boilers to heat the plant — thereby substantially reducing the reliance on external energy sources.

The energy produced at Chambers Creek will be used to heat the plant year round and will support the creation of SoundGRO fertilizer. Using fertilizer like SoundGRO made from biosolids is a safe and effective way of “closing the loop” and recycling natural resources.

Expansion at Chambers Creek is scheduled to be complete in the spring of 2016.

Net zero and beyond 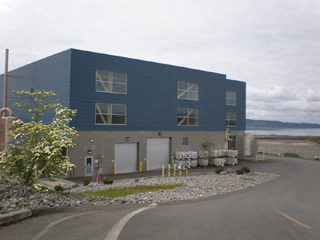 [enlarge]
SoundGRO fertilizer is produced inside this Chambers Creek building.

Energy-neutral and energy-positive WWTPs are cropping up around the nation and globe:

• Gresham will have the first WWTP in Oregon to power itself entirely off natural gas generated by a microbially digested combination of wastewater and restaurant grease.

• Through a series of biogas-fueled microturbines and the implementation of a co-digestion program, Sheboygan, Wis., now produces more energy than it needs to operate.

• East Bay Municipal Utility District in California produced 90 percent of its power needs through co-digestion prior to 2011.

• In partnership with Ameresco, San Antonio has undertaken a project to produce, clean and sell its methane on the open market as pipeline-quality natural gas.

• In Austria, Strass im Zillertal is the benchmark for energy-positive WWTPs, feeding a surplus of approximately 8 percent of its energy needs back to the grid.

By scrubbing the excess gases produced to remove hydrogen sulfide gas, the refined gas could go back to the grid. It could then be used as natural gas in homes or directed to a generator that would send electricity back to the power grid for consumption. While this technology is possible, further development is needed to improve cost effectiveness to allow for wider adoption.

Tom Paul is construction executive of environmental work at Mortenson Construction, a national general contractor with a local office in Kirkland focused on renewable energy, alternative project delivery and innovative use of technology.