The phrase “the best of times” conjures up an image of economic prosperity, healthy living and shared visions — qualities not always associated with environmental cleanup projects. Still, an innovative and collaborative approach between two environmental projects at the Port of Bellingham is helping to transform the waterfront into a healthier, sustainable landscape for economic and civil engagement.

The port manages more than 1,650 acres of land and offers 2,000-plus boat slips in its harbors. A glimpse at the port’s website reveals beautiful vignettes of the port’s recent activities, waterfront development for economic growth, stunning vistas of marinas with moorage opportunities, and environmental cleanup projects transforming contaminated spaces into public places.

One of these cleanup projects involves the Cornwall Avenue Landfill site, at the south end of Cornwall Avenue. The site covers 16.5 acres, with about 3.5 acres extending into the water. 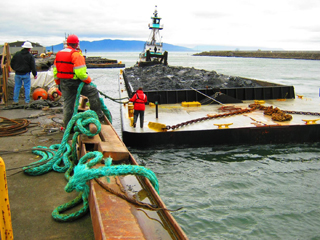 The site — jointly owned by the port, city of Bellingham and the state — was used for sawmill operations between 1888 and 1946, and then as a municipal landfill from 1953 to 1965. These past uses resulted in a substantial amount of municipal and wood waste at the site, with some contaminants leaching into groundwater, surface water and adjacent sediment.

Of particular concern at Cornwall was stormwater infiltrating through the waste materials and carrying contaminants via groundwater into Bellingham Bay. That was a driver for site remediation. Additionally, the site is within the Waterfront District redevelopment area, which is undergoing extensive planning to transition from its industrial roots to a mixed-use urban neighborhood, so site remediation will need to be consistent with future land uses.

Meanwhile, roughly two miles north on the Bellingham waterfront, the port was under way on another project to renovate floats F and G at Gate 3 in Squalicum Outer Harbor. A new float/slip system design by Reid Middleton, a civil engineering firm based in Everett, would provide additional moorage and replace existing creosote-treated wood pilings with concrete piles for a healthier harbor.

A portion of the marina was also in need of maintenance dredging to remove approximately 40,000 cubic yards of accumulated sediment, an issue for vessel passage at low tide for both existing marina tenants and the desired larger vessels targeted with the new float/slip system. 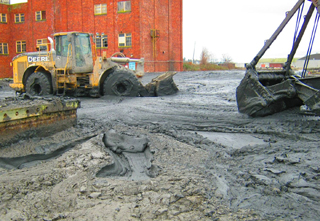 Faced with the costly alternative of upland landfill disposal of the dredged material, the Gate 3 renovation project was put on hold by the port until a better solution was identified.

An inspired solution came as a result of the port and its environmental and engineering consultants tackling issues and concerns across these two projects.

Port staff worked with Larry Beard, Landau Associates’ project manager for the Cornwall project, Dave Pischer, Landau’s project manager for the Gate 3 project, and the state Department of Ecology. Together, they designed and implemented an interim action that would beneficially reuse the Gate 3 dredged material as low-permeability fill that could become part of a future capping system at the Cornwall site. 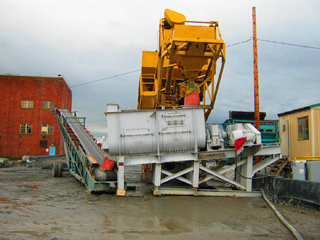 Dredged material is increasingly seen today as a potential resource, with strategies and methodologies for beneficial reuse developed throughout the world. However, fine-grained sediment such as that at the Gate 3 site pose a unique set of engineering challenges for reuse, including cost-effective rehandling and dewatering/stabilization to a condition suitable for its intended reuse.

The Gate 3 sediment was dredged from late December 2011 to February, with the material barged to a pier at the former Georgia Pacific Mill site where it was off-loaded, stabilized for excess moisture, and then trucked to the Cornwall site.

Sediment stabilization was accomplished during the wet season by blending the saturated, fine-grained sediment with approximately 5 percent (by wet weight) Portland cement using a mechanical pug mill batch plant system. The material sat until it achieved a soil-like consistency prior to being hauled and stockpiled under cover at the Cornwall site.

Getting the mix right

Determining the proper mix design and methodology for blending the dredged material with a readily available absorbent to achieve a soil-like material that could be placed as a low-permeability compacted fill was one of the biggest design challenges. Laboratory testing using a variety of absorbent materials indicated that Type III Portland cement would be the most effective mix design. 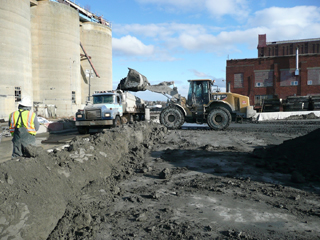 [enlarge]
Stabilized sediment is loaded for transport to the Cornwall Avenue Landfill site.

Initially, it was anticipated that the stabilized sediment would be placed and compacted directly after transport to the Cornwall site. The port and Ecology subsequently decided that the material would need to be stockpiled under cover for several years, and that it would need to maintain a soil-like consistency until it was regraded and placed as compacted fill as part of the final cleanup action.

Thus, use of too little cement would not properly stabilize the saturated sediment, and use of an excessive amount of cement would result in the sediment becoming too hard for placement at a later date.

Ultimately, about 47,500 cubic yards of dredged material from the Gate 3 area was stabilized for excess moisture, and placed in covered stockpiles at the Cornwall site. Environmental controls constructed at the site included a shoreline berm, perimeter roadways and drainage ditches with an underlying geomembrane to limit stormwater infiltration through the landfill refuse, a landfill gas collection and venting system, and a geomembrane cover over the stabilized sediment stockpiles to direct stormwater to an existing detention basin and spillway to Bellingham Bay.

Because the port operates in environmentally sensitive waterfront regions, particular caution was given to the potential for dioxin mobility after stabilization and placement of the sediment at the Cornwall site. Samples of the stabilized sediment were analyzed and the results confirmed that the low-level dioxin concentrations were similar to the pre-dredge sediment samples and would not pose any additional contamination risk. 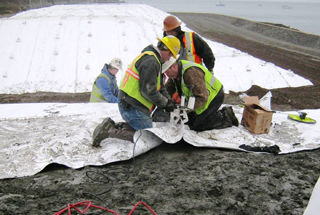 This highly visible project also presents an opportunity to inform and communicate to the public how dredged material could be safely and successfully reused for development projects.

The Cornwall site is in the remedial investigation/feasibility study phase of the cleanup process under the Model Toxics Control Act. As such, the final remedy for the site has not been selected by Ecology. However, future plans for the site are anticipated to include integration of the stabilized sediment into a final cover system, and redevelopment of the site into a park, trail and mixed-use area. 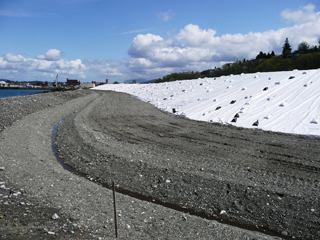 For Bellingham, innovation and collaboration across these projects produced a far better solution than could have been achieved independently. Costs were contained, multiple efforts were implemented for a cleaner Bellingham Bay, and thousands of cubic yards of dredged material were put to beneficial reuse, rather than sent to a landfill for disposal.

In this tale of two projects, the often sought-after “triple-bottom line” was indeed achieved, yielding the desired societal, environmental and financial benefits.

Cindy Easterson is a marketing coordinator with Landau Associates, a firm that specializes in environmental and geotechnical engineering, environmental permitting and natural resources consulting. Landau has offices in Edmonds, Tacoma, Seattle, Spokane, Tri-Cities and Portland.