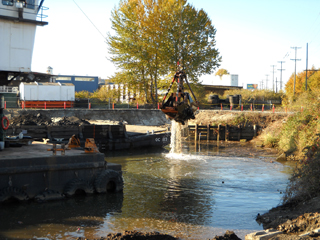 For Integral Consulting, it’s good to be spread out. The civil and environmental engineering firm has offices around the country.

Having recently received Zweig White’s Hot Firm award this year for fast growth and financial performance, Integral has found work from brownfields in New York City to the Duwamish River. The firm has 14 offices in the United States, and its most recently opened was in New York. The majority of the firm’s work is in environmental sciences and engineering.

“We do a significant amount of work for clients who have contaminated sediment sites,” said Day. “We are also growing our stormwater project portfolio in Oregon and California.”

She said the steam plant had been identified by federal agencies as a possible source of contaminants to Slip 4. “We want to prevent the re-contamination of Slip 4, so we did an upland source control action.”

The cleanup of the Lower Duwamish Waterway, she said, is being led by the Environmental Protection Agency and the Department of Ecology.

Integral is also designing the cleanup of residential yard soils near Terminal 117 in South Park.

Mining work in areas such as Colorado has picked up, as the price of gold has soared, Day said. Working in the firm’s Louisville, Colo., office, engineers focus on permitting issues around expansion and cleaning up mines.

“I do a lot of work in Missouri,” said Day. “I work for a mining company on cleaning up of a river impacted by mine-related materials.”

Integral’s New York City office is devising a program for encouraging the re-use of construction materials in that city. “It’s clearly a great step toward sustainable development,” she said.

The firm also is working on engineering for brownfields redevelopment in New York, “to lay the foundation for new development of industrial properties that had laid quiet for a considerable period of time,” she said.

“A majority of our firm is owned by women,” she said. “We are built around a culture of collaboration.”