Getting stormwater back into the ground

Recent regulatory and design trends have placed a strong emphasis on increased infiltration of stormwater, collectively known as low-impact development (LID) stormwater methods or practices. This trend is paralleled by the increase in infiltration of highly treated wastewater (e.g., reclaimed water) instead of discharging to rivers or Puget Sound.

LID stormwater methods include a variety of constructed facilities to capture, store and convey stormwater runoff into the ground, such as infiltration ponds, trenches, rain gardens, drywells, permeable pavement and bio-retention. All basically involve some means of collecting and holding the runoff to allow it to infiltrate or percolate into the ground. Runoff can also be treated by passing it through soils or vegetation with pollutant reducing or trapping properties. 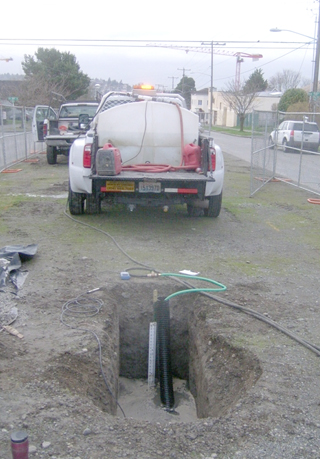 Much of the precipitation that falls on developed areas hits impervious surfaces (streets, roofs, etc.), and then flows as runoff to be collected by storm drainage systems. These systems include catch basins, pipes, storage ponds and outfalls to streams, rivers or the Sound.

Getting stormwater out of these pipes and into the ground is a good thing, because it: 1) more closely mimics pre-development conditions, when most stormwater soaked into the ground; 2) reduces peak flows; and 3) provides treatment, reducing pollutant loading to receiving waters.

This article focuses on stormwater infiltration, recent changes in the Department of Ecology’s Stormwater Management Manual for Western Washington, and GIS-based approaches to managing stormwater.

Till, we meet again

The most important parameter controlling infiltration is the permeability or hydraulic conductivity of the soils. Around the Puget Sound area, much of the soil is glacial till, a concrete-like mixture of silt, sand, gravel and cobbles packed to astounding density by the half mile of glacial ice that sat on top of it during the last Ice Age (as anyone who a has ever tried to plant a shrub in it can attest).

Soils in areas underlain by till do not transmit much water, and LID methods in till need to be carefully designed such that the main benefits will be detention and treatment.

Other areas are underlain by sandy soils known as outwash, which “washed out” of the glaciers several times — once as they advanced southward, and again as they melted and retreated back to Canada, each time leaving stream and river-deposited sands and gravels. These soils have high permeabilities, are mined for aggregate in some areas, and make excellent infiltration facilities.

Other soil types also exist, but glacial till and outwash dominate much of the Puget Sound area.

Areas with outwash under till at a reasonable depth may be amenable to “deep infiltration” methods, such as infiltration trenches, galleries, drywells, or other facilities that introduce the water below the surficial low-permeability soils.

[enlarge]
Pilot infiltration testing can be conducted at or below grade, depending on the design depth of the pond. A large steel ring is used to test soils at grade.

In order to design and size infiltration facilities, early versions of the Ecology manual (and many local stormwater manuals) relied on small-scale infiltration tests (e.g., percolation tests or double-ring infiltrometers), typically involving adding water to a small-diameter pipe in the ground, and timing the rate at which the water leaked out onto your shoes.

These methods were eventually found to be inaccurate, and many jurisdictions moved towards using empirical methods correlating hydraulic conductivity to soil textural classifications or laboratory grain size distribution data.

Other methods involve adding water to larger rings or excavations, several feet in diameter. These are known as pilot infiltration tests, or PIT. The new Ecology manual strongly favors PIT over grain size testing, limiting the latter to soils not glacially overridden and compacted, which represent a small fraction of soils found in this area.

Pilot infiltration testing is conceptually simple, but can be logistically difficult. The basic procedure for PIT involves filling a large (12- to 100-square-foot) hole in the ground with water and measuring the flow rate which supports a steady water level (a “constant head” test). After reaching equilibrium (6 hours minimum), the water is turned off and the rate of water level decline is measured as the remaining water soaks into the ground (a “falling head” test).

The rate measured near the end of the test is the short-term infiltration rate, or saturated hydraulic conductivity, which is further adjusted using correction factors based on the perceived adequacy of the site evaluation and the predicted degree of siltation and biofouling, to yield a design rate.

The new manual also encourages more robust site explorations such as soil borings and ground water monitoring wells, as well as analysis of ground water mounding, which is the localized rise of the ground water table beneath an infiltration facility. 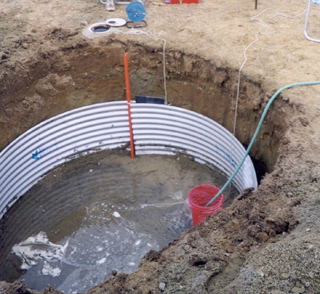 [enlarge]
The ring is placed at the planned pond depth to minimize soil caving during pilot infiltration testing at depth.

A LID stormwater management option not detailed in the manual and not commonly considered is retrofitting existing detention ponds to increase infiltration.

Many detention ponds have outlets near the bottom, so they don’t retain much water for very long. If the pond is situated in permeable soils, substantial increases in overall infiltration can be achieved by modest increases in the dead storage capacity (i.e., water below the outlet). This can be accomplished by either modifying the outlet structure (e.g., raising the outlet pipe) or the pond configuration (size, volume, bottom elevation).

Modifying the outlet is problematic from a pond performance and potential liability perspective, so deepening the pond, only by a foot or two, is often the easiest way to go. This type of retrofit does not provide much benefit for reducing peak flows, as even high infiltration rates are no match for peak storm flows entering a pond. However, this approach can significantly reduce the total volume of runoff leaving the pond (up to 40 percent based on a project in Kitsap County).

Changing the pond configuration may be more useful where long-term recharge to ground water or augmenting dry season stream base flows are the main objectives.

Many agencies are using geographic information systems to guide LID stormwater planning, ordinance development and permitting. In many cases the GIS system is already populated with data relevant to LID practices, from critical areas mapping.

Arnie Sugar is a hydrogeologist and president at HWA GeoSciences. HWA provides geotechnical, geoenvironmental, hydrogeology, inspection and testing services; serving the Northwest and beyond since 1978.