Last Friday, you may have seen some peculiar happenings curbside in various places around the city in what are usually metered parking spaces.

Park(ing) Day is an annual event where artists, designers and citizens transform those spaces into temporary public parks and other creative displays. Over the last seven years, it has grown in popularity to become a traditional event every third Friday in September in cities all over the world. More information on global events can be found at http://parkingday.org.

The brainchild of San Francisco art and design studio Rebar, the event originated in 2005 when a group from the firm transformed a metered parking space outside its offices into a little green space in the midst of gray for a mere two hours. When a photo of this first Park(ing) Day went viral after it hit the web, Rebar was inundated with requests to help others interested in bringing attention to the need for green, open space in cities.

With more than 20 percent of the land in our cities devoted to cars and trucks, it is not hard to imagine why there was so much interest. Rather than capitalizing on the event themselves, the folks at Rebar promoted the project as an “open-source” model. They developed a manual to help others create installations, and provided free marketing materials. 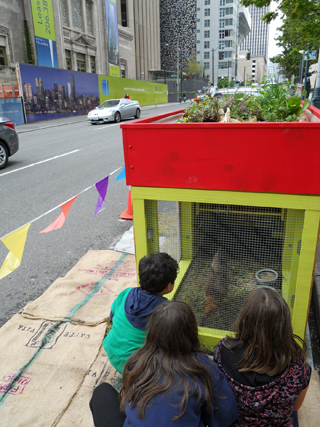 Photo courtesy of SDOT [enlarge]
A popular installation during the 2010 Park(ing) Day was this urban chicken coop in downtown Seattle.

With the guidance developed by Rebar, Park(ing) Day has evolved from a “tree-bench-sod” park concept to: free bike repair and health-care clinics; urban farms; clean water demonstrations; forums for political debates; and even host to a wedding ceremony.

Over the past several years in Seattle, a wide variety of collaborations and events have celebrated Park(ing) Day. In 2009, Seattle projects ranged from yoga lessons to street-side bowling alleys to giant chess and “Connect Four” games to ping-pong to treats.

Cascade Bicycle Club’s spot featured a bike-powered smoothie blender in 2010, while West Seattle Junction devoted three parking spaces for a free-speech platform that included a display on the history of the free-speech movement. An urban chicken coop, befit of its urban parking environs, was a big hit with kids and adults in Seattle’s downtown.

Last year more than 15 parking spaces from the Rainier Valley to Fremont were taken over by Park(ing) Day projects initiated by 10 groups, many in collaboration with Feet First (Seattle’s chapter of the original Park(ing) Day group), Seattle Department of Transportation, King County Parks and Recreation, and the Seattle Art Museum.

During Latino Heritage Month in the Rainier Valley, SDOT and the Latino City Employees group partnered to take over parking spaces with colorful flags, lawn games and music to raise awareness of the importance of a walkable, livable and healthy city, as well as the city’s Race and Social Justice Initiative.

The Seattle Art Museum and Trust for Public Lands joined forces to create the Midwest CornHaul game (bean bag toss) and arts/crafts station during the International District’s Design Festival to bring attention to the fact that “design” is not just about architecture.

At ESA, a group of staffers galvanized all 14 of our offices in a friendly competition to design a Park(ing) Day installation outside our downtown Los Angeles office. The ideas were amazing, fun and creative; and inspired conversation among groups who otherwise do not have the opportunity to work together. This mixing of ideas, individuals and creative expression parallels some of the Park(ing) Day objectives.

ESA staff teams generated more than 30 designs. Employees in the Los Angeles office voted for their favorite concept, and the winning team from Seattle traveled there to install its work.

This year Feet First sponsored an end-of-summer lawn party in Pioneer Square, occupying parking spots in Nord Alley and Main Street with live music, art, bicycle polo, bocce ball and a barbecue. Were you there?

Next year, consider initiating a Park(ing) Day event near your office and reap some of the parallel benefits. Pencil it in on your calendar and start planning your unique concept! Contact Feet First for more ideas at http://feetfirst.org.

You will also find the Seattle Department of Transportation supportive and especially helpful when planning your spot: www.seattle.gov/transportation/seattleparkingday.htm.

Danielle Pierce, LEED ND, is a landscape designer and GIS analyst; Reema Shakra, AICP, is a senior planner. Both work for Environmental Science Associates, a multi-disciplinary environmental and land-use planning firm that has assisted local governments and private developers with community development, natural resource assessments and regulatory compliance for more than 40 years.