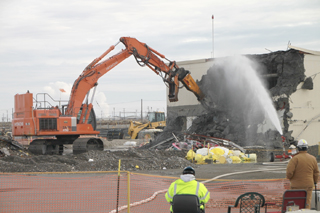 Q. How much of your local business is for environmental services? Are your clients mainly private or public?

Martin Powers, environmental service business development manager: Roughly a third of our local business is for “environmental services.” Locally, approximately 70 to 75 percent of our clients are public, but nationally the split is more like 50 percent public and 50 percent private. The ratio of private client work has increased over the past three to five years by about 10 percent.

Q. What’s changed in the industry since the 2008 recession?

Powers: Public sector discretionary spending — and that can cover many categories of projects — has dropped significantly and many contaminated land redevelopment projects have lost momentum.

Q. What has your firm been doing to adapt?

Q. What technology has a lot of potential but hasn’t been widely adopted?

Powers: Solid waste conversion technologies — processing of mixed municipal solid waste to recover materials and energy — are an example of a group of technologies that we believe will become more widely adopted for a lot of reasons: increased goals to limit the amount of materials going into landfills, development of renewable energy, heightened focus on sustainable practices, etc. We see these technologies being implemented internationally and in several other states and expect them to become more prominent locally.

Powers: We would like to see a real focus toward renewing and replacing aging infrastructure locally and throughout the country. Modernized and sustainable infrastructure is key to the continued recovery of our economy and a clear path toward creating more middle-income-waged jobs, and we support efforts to push forward infrastructure modernization in an intelligent way.

Q. Have you been hiring lately?

Powers: As with many local firms, our staff level has remained fairly static over the past few years. We add key personnel when the opportunity arises, but the market does not dictate a large uptick in hiring.

We have found that personnel are still hesitant to change jobs in the current economic climate and this has an impact on staff retention and recruiting.