How urban agriculture can help grow the economy

The interest surrounding urban agriculture continues to grow as more people and projects embrace a secure and sustainable approach to producing local food. Yet there are still many questions to answer.

What’s next? And how does this fit into the bigger picture of the national food system? Can people make a living as an urban farmer? Why and how should infrastructure be changed when it comes to food?

These are questions that people from all over the U.S. — and beyond — are trying to address.

For anyone who has eaten a locally grown fresh vegetable, there is nothing quite like it. The quality and the taste are extraordinary, but should eating local, fresh food be a luxury or a staple? 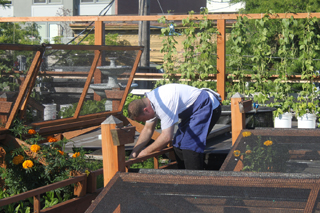 Photos courtesy of the Berger Partnership [enlarge]
Produce grown on the roof of Bastille Cafe and Bar is served inside the Ballard restaurant.

Some of the answers were found at the first ever Urban Agriculture Summit, which took place last month in Toronto.

As people struggle with these questions, many are contending that urban agriculture has the potential to help solve food-related supply issues, such as food “deserts” in urban centers. Urban farming could also play a key role in helping to reverse the national obesity trend (according to the Centers for Disease Control and Prevention, the average rate of obesity has more than doubled in the past 20 years).

Some are looking to locally produced food as a potential way to provide local jobs in difficult economic times, while others are looking to urban agriculture to provide better opportunities for education, cultural connections, community building and rehabilitation.

Regardless of the ultimate goal, there are some exciting fundamental concepts swirling around urban agriculture. Public and private entities alike are at a critical juncture to help shape its development over the next five years, and the design community is in a unique position to help facilitate the transformation.

“Adversity inspires change.” This should be the motto for Cuba.

Cuba is without a doubt the most inspiring and successful example of a country with organic, locally produced food. The country revolutionized its food system almost overnight out of necessity, not by choice. At the time of the breakup of the Soviet Union in 1989, Cuba’s food supply was predominantly from abroad, and most of its agricultural endeavor was focused on the production of sugar for export.

Almost immediately, the people of Cuba were starving without an established food system and did not have the resources to continue their current path. The average Cuban lost 30 pounds as the typical caloric intake changed from almost 3,000 calories per day to 1,200.

Since then, more than 100,000 small urban and suburban farms have sprung up — often on abandoned sites and publicly owned land.

According to Miguel Salcines of Organoponico Vivero Alamar, one of Havana’s largest and most successful urban farms, a greater percentage of the population currently farms professionally than in the last 50 years. The number of farmers’ markets, new farmers, and farmers’ cooperatives continue to grow.

As a result, Cuba’s unemployment rate dropped from 6 percent to 2 percent, and its GDP tripled. This is especially remarkable given that in the same time-frame, unemployment in the U.S. went from 4 percent to 8 percent. 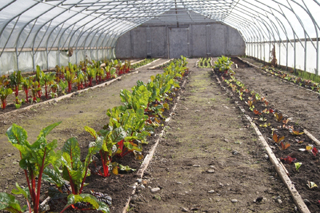 [enlarge]
The 10-acre Rainier Beach Urban Farm and Wetlands project provides a place to grow food, and get job training and mentoring from professional farmers.

BrightFarms, a development and financing company out of New York, is redefining the architectural term “mixed-use.” It is one of the newest fledgling businesses devoted to urban agriculture and sustainable business practices.

BrightFarms’ model consists of constructing greenhouses on grocery rooftops and signing a 10-year agreement with the store to supply market-rate produce.

This approach is inspiring because it offers locally grown produce to market shoppers by developing a low-impact business literally on top of an existing one — while increasing profit margins for BrightFarms and the grocer.

Seattle Urban Farm Co. helps design, build and maintain residential and commercial urban farms throughout Seattle, paving the way for larger endeavors and increased urban farming acreage within the city limits. It helped Bastille Cafe and Bar in Ballard realize its vision of a rooftop garden that supplies much of the produce served in the restaurant.

To create and maintain such a specialized landscape as that of a productive farm requires the skills of a farmer.

Local projects — such as the Rainier Beach Urban Farm and Wetlands, a 10-acre site in the Rainier Valley — are attempting to meet all of the economic, environmental and social goals mentioned above. Rainier Beach will be Seattle’s next best example of exploration into the possibilities afforded by urban agriculture. It will provide the opportunity to not only grow local food, but offer facilities for job training, mentoring from professional farmers, and a great amenity to the community and the city.

As larger farms such as this begin to affect the possibilities beyond a single company or business, urban farming has the potential to impact local food production at a neighborhood or city scale — making the possibilities boundless.

Jason Henry, a principal at the Berger Partnership, is a landscape architect with a deep interest in forwarding urban farming in Seattle.