By BARBARA TRAVERS
Special to the Journal

“I saw this great TED (technology, entertainment, design) talk the other day” is how our conversation begins. An engaging line from anyone, but when Matt Hooper says it, light bulbs seem to snap overhead and you know you’re about to learn something really cool.

Whether it’s the latest YouTube revenue sensation you’ve never heard of (but your kids have) or a video game that challenges players to solve molecular mysteries, Matt’s right on top of it. He’s the guy you want to sit next to at a dinner party. His curiosity and appetite for innovation makes sense considering his law specialty — digital media and entertainment — but he doesn’t come across as your typical corporate attorney.

Hooper facilitates. He’s a catalyst. He considers himself an advocate and a connector who puts in the hours and likes to outwork others, yes, but spends every day making strategic introductions for his clients and matchmaking brains with ideas. Refuting the stale perception of the decree and dictum lawyer, Hooper has an obvious passion for his practice and his clients. 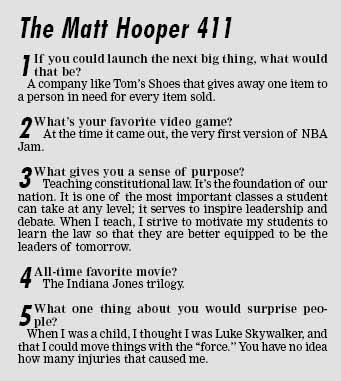 “Look, in today’s sensitive economic environment, your legal provider, your lawyer, should not be viewed in the expense column, but should be viewed in the asset column,” says Hooper. “I can’t change perception, that’s not my job, but I can serve my clients best by treating them respectfully, putting in the work and building trust.”

One of his clients, Bellevue-based VMG/Studio 520, a creative digital production company, has nothing but high marks for Hooper. “Matt is a unique human being,” says Mark Sparks, VMG’s president. “He doesn’t just represent our business; he helps us build our business. He really has our best interest at heart.”

Born and raised in Los Angeles, Hooper’s practice evenly splits between the film/television and video game industries. With his mixed-bag resume, he could easily sit on many sides of the table. He dabbled in the obligatory showbiz pipe dream, opened a retail store at age 20, produced films, majored in broadcast journalism and interned at the White House during the Clinton administration.

While back East “absorbing and learning,” Hooper caught wind of a new technology that has evolved into today’s live video streaming. (Remember the dreaded “buffering, buffering” message?) He headed back to LA and launched a company delivering HD-quality live video streaming, unheard of at the time.

“The problem with it was nobody could watch it, nobody had a modem fast enough, few people had DSL,” said Hooper.

Recognizing the demand for online content, and to demonstrate what this technology could do, led to the development of one of the first online proprietary networks.

“We developed proprietary content for our little 24/7 station which was eventually viewed in 44 countries,” he said.

That got Hooper noticed. By Hollywood standards, actually doing something no one else was doing was a door and eye-opener. The company grew quickly from three employees to 55.

Fast forward through the dot-com bust and some soul searching to a life-changing conversation with Internet application mastermind Marco Garibaldi (credited with developing the online shopping cart and more).

“I asked him what he would have done differently in his career and he told me he would’ve gone to law school to understand the business better,” said Hooper. “There was so much I didn’t know that I wanted to learn about the business. So I got my law degree, which I value greatly. He was right.”

Landing in Seattle, his wife’s hometown, was good fate. “The Northwest has unparalleled corporate compassion and vision. Every time there’s been an advance in technology, this region is right there. Boeing. Microsoft. Amazon. And here we are again with the game industry,” he said. “Seattle is by far my favorite city.”

The Foster Pepper Media, Entertainment & Game Group chair represents YouTube phenomenon Elle & Blair, two sisters whose savvy makeup tips videos launched a beauty and fashion empire. With more than 400 million views, the spunky sibs have stamped their international brand on just about everything girly-girl, from a cosmetics line to a glitzy novel to endless product endorsements (some paid, some not).

Hooper handles the legalities for them. If you’re curious as to what some of that might entail, click on the tiny words “terms of use” at the bottom of virtually any commercial website. It’s the pages of legal schmegal we rarely read before we click on “agree.”

He’s talking about small- to mid-cap firms, not Microsoft and Nintendo, the XBoxes and Wiis, although he notes that Microsoft’s largest growth (2010-11) has been in its entertainment division and that Forbes ranked Seattle No. 1 of 51 cities in the U.S. in 2011 for high-tech job growth.

Hooper studies the video game industry and meets with developers and CEOs to understand the process and where the industry’s headed. Understanding distribution platforms and the evolution of games is never-ending and constantly changing. He analyzes the economic and social impact and the demographics — who’s playing what, where and when.

There’s good and bad news. Beyond the speculation of games begetting violence and children turning into bleary-eyed zombies is the credible difference games are making.

Hooper’s on the bus to debunk the myth of the evil video game.

“We are seeing children learning real life skills from what is becoming an important part of our educational landscape. Five-year-olds are learning algebra — check out Dragon Box,” he says. “We’re seeing world-changing ideas through games, such as the game Fold It, which has gamers uncovering protein patterns useful in solving medical dilemmas. We’re seeing teenagers solve what baffles scientists.”

Video game technologies are using gamer brain power to advance social issues as well. The game Evoke, created by the World Bank Institute, dubbed “a crash course in changing the world,” has players attack social problems, not superheroes, through missions and quests and earned powers. Issues such as poverty and human rights. The game started in Nigeria, but has grown worldwide and joins a host of interactive games designed to aid humanitarian and social work.

“The answer isn’t no video games, it’s the right video games,” says Hooper. Has he ever invented a video game? He laughs. “No. Only on the playground as a kid. I wish I was smart enough to do that.”