It’s a great time to invest in local retail

In the last four quarters, Seattle’s employment has grown at an average annual rate of 2.5 percent. The CBRE Econometric Advisors forecast predicts growth of 1.6 percent in the Seattle area in the next five years. Seattle’s construction employment sector will post the best job performance over the next five years when compared to the other job sectors.

Although employment growth over the next five years will be modest, new retail supply will not keep up with demand. Job and population growth coupled with increases in per capita income are driving up demand for retail space.

Demand is predicted to outpace construction by almost double during the 2012-17 period. This is good news for landlords and investors alike as occupancy levels of existing retail space will rise and rents will follow.

As reported by CBRE Econometric Advisors, U.S. September retail sales growth was positive, even accounting for a jump in auto and gasoline sales; on a month-to-month basis, growth in core retail sales was close to 1 percent. Consumers no doubt remain circumspect about the economy, but heading into the holiday shopping season we are seeing positive signs that consumers are still willing to shop.

As we finish out 2012, year-over-year growth in core retail sales is expected to stay in the 3.5 percent to 4.5 percent range, and possibly exceed that during the holiday shopping season. Core sales are still growing, which means that retailers will continue to demand more space (though it will be muted compared to previous recoveries), helping to stabilize availability rates for the rest of the year. 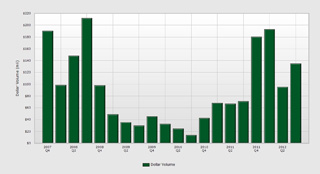 The last few years have been “blue light special” times for value and discount retailers. Bold, well capitalized national and regional retailers took advantage of anchor retail spaces that had been vacated by the closing of several other retailers not able to weather the storm of the Great Recession.

Has anyone noticed that we have a few more banks in the region? How about espresso stands? Other categories that have continued to expand despite the economy are quick-service restaurants, personal services, restaurants with liquor, and pawn shops that have embraced consumers’ demand to spend money on something, anything, to make them feel better.

To analyze the retail market of the future, we divided the data for vacancy and rental rates into two categories. The results show that spaces less than 10,000 square feet are following the expected trend of rising rents as vacancy levels drop. Other trends are demand for smaller space is higher than that for larger space; and retailers are shrinking their leasable area whenever possible to cut down on overhead. Convenience retailers often fit into this smaller size category by the very nature of their business.

Retail spaces of more than 10,000 square feet were the hardest hit during the economic downturn. Typically these spaces are occupied by destination types of retailers. As we all know, the “category killers” of the past couple of decades have managed to kill off the weakest competitors in all categories except office supplies and hobbies.

Data shows rental rates going down for the larger spaces because of soft demand. Many of the vacant retail boxes of more than 10,000 square feet have been backfilled by non-traditional retailers. Some of the uses we have seen for these spaces are back office/call centers, schools, medical offices, churches and auto-related services.

The number of retail sale transactions in the Puget Sound region (King, Pierce and Snohomish counties) more than doubled in the second quarter of 2012 when compared to the same period in 2011.

Also noteworthy is the continued compression in average cap rates to 7.21 percent, down from 7.61 percent in the second quarter of 2011. The average cap rate for 2012 has been significantly impacted by a few key sales of grocery-anchored centers: Whole Foods in Lynnwood traded at a 5.75 percent cap rate and the Maple Valley Safeway-anchored center at a 5.55 percent cap rate.

Retail assets were very popular in the third quarter of this year as well, where total sales volume was up 27.9 percent over the second quarter of this year. Comparing third quarters of 2012 and 2011, the increase in volume was 14.3 percent. Two sales in this quarter comprised the majority of the increased volume: the sale by Safeway of the project it anchored and developed in West Seattle for $30.7 million and the $18.7 million Merlone Geier acquisition of the Sherwood Shopping Center in Bellevue.

What happened? In the third quarter there were the two large sales we mentioned above, neither of those reported cap rates. Also in this quarter, there were three REO dispositions and a couple of distressed sales that brought the cap rate averages up.

With the increased availability of financing and interest rates for quality retail assets hovering in the range of 4—5 percent, retail investments offering 5—8.5 percent cap rates present great positive leverage for investors in this asset category. The positive leverage alone exceeds what investors can achieve on treasuries and other substitute investments, so why wouldn’t this be a great time to invest in retail assets?