By BARBARA TRAVERS
Special to the Journal

Education reform has been a topic of debate ever since the Roman Empire. Plato’s belief that “children won’t learn unless they want to learn” could be a clue to today’s catastrophic shortage of STEM (science, technology, engineering and math) skilled workers.

In Washington state, more than 30,000 jobs will go unfilled in the next five years due to the lack of qualified workers. That’s unacceptable considering we have the highest concentration of STEM-related jobs in the U.S. and we rank fourth for technology-based corporations.

When middle schoolers would rather take out the garbage than do their math homework, we’re in deep trouble.

Caroline King, chief operating officer for Washington STEM, and a band of CEOs from across the state saw the crisis as urgent. At that time, King was serving as executive director of Partnership for Learning, the nonprofit education advocacy arm of the CEO-led Washington Roundtable. She was all too familiar with the challenge of public policy change. 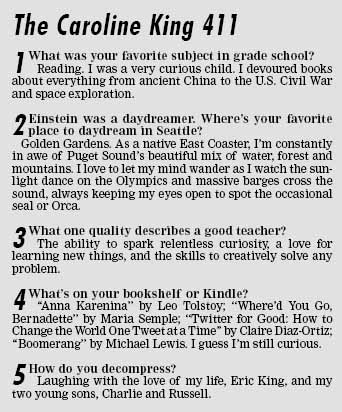 “Driving statewide policy change is so critically important and it’s going forward, but what the CEOs recognized was that we just can’t wait,” said King. “We need to dramatically transform the teaching and learning experiences that our kids are getting today.”

After an intense review of the national STEM landscape, the group saw both successes and gaps. A learning assessment phase and series of statewide meetings produced a business plan and Washington STEM was launched in 2011.

“We studied many education models and found so much already going on, but there was no real knowledge sharing, no real coordinated effort,” said King. “So we created one.”

King taught ninth grade in Guayaquil, Ecuador, just out of college. The school had a Robin Hood modus operandi: It charged a hefty tuition for those who could afford it and gave full scholarships to students who could not. The school focused on subjects the students needed to transform the trajectory of their lives: English and technology.

“These kids were the first to attend high school in their families, much less graduate,” said King.

On return visits, she found the students fulfilling dreams of college and careers. “That’s what got me hooked on education.”

McKinstry CEO Dean Allen is board president of STEM and was one of the change agents at that roundtable. He wants no talent left behind.

“Washington STEM is connecting teachers to resources, support and partners that help them provide rigorous, inspiring experiences for students in and out of the classroom,” said Allen. “Caroline King’s dedication and expertise have been crucial in influencing the evolution of this work and the progress we’ve made on our plan.”

McKinstry is a design, build, operate and maintain contractor. McKinstry’s Innovation Center in Seattle, a cluster of forward-thinking, entrepreneurial companies, is headquarters to Washington STEM.

The rapidly progressing grassroots effort is based on the recognition that STEM education has to happen on the ground, in classrooms and in communities. The nonprofit is supported by donors and partners in an effort to accelerate success for every student in the state, regardless of locale, age, income or representation.

A student living in the same town as Microsoft’s headquarters is afforded the same opportunity as a student in Yakima. STEM’s mantra, “We won’t rest until every student is prepared to succeed in our economy,” is contagious. The list of community networks, corporate donors, and teacher and student participation is extensive and growing.

“We’ve invested millions of dollars across the state, investing in breakthrough ideas and promising practices,” said King. “Training teachers, facilitating peer mentoring. We’ve found a lot of bright spots and we highlight these individuals and their creative solutions to set an example for other schools to create models for learning.”

So how do you get kids jazzed about math and science as much as they are about taking out the garbage? Start early. A partnership with the Seattle Public Schools Early Learning Department helped coach teachers in getting science into classes as early as pre-school. STEM then shared the curriculums to help other schools ramp up early engagement in science.

A high school focus group discovered that students are simply not aware of the kind of jobs and salaries that involve math and science. A solid foundation is being built by inspiring students and changing the mind-set that math is hard and science is for nerds by introducing them to real world “cool” innovations. Video games are technology. Spaceships are science.

STEM financial and mentoring partner Lease Crutcher Lewis, a Northwest construction firm, facilitated such a hands-on experience with the after school club from Tacoma’s Lincoln Center — a small college prep school within Lincoln High School. The students and a team of Lewis engineers worked for six weeks learning about the inner mechanics of their own high school, which Lease renovated in 2007. Lease then briefed the students in the planning and engineering of a real construction project in Seattle.

Said one student, “I learned about new things that make me want to be an engineer when I grow up. I enjoyed learning about things and how they work.”

Neah Bay High School is living proof. A grant from Washington STEM, and the vision of Principal Ann Renker, led to the development of the Catalyst Corps peer tutoring program that pairs high-achieving high school kids with struggling middle schoolers. After one year, not one student was failing a class.

“Teaching on the Makah reservation has unique challenges and opportunities,” said Renker. “Washington STEM encourages us to be innovative — in a way that really connects with our community. I’m seeing cheers and high fives because kids’ grades are improving. It’s huge and it’s working.”