By LYDIA BENNETT
Port of Bellingham

Planning agreements are under way and developers are being sought for the first development area within more than 200 acres of brownfield waterfront in Bellingham called the Waterfront District.

This redevelopment site has been years in the making due to complex partnerships and site-wide infrastructure and cleanup planning. The good news is that partnerships are stronger than ever among the Port of Bellingham, city of Bellingham and the state Department of Ecology, who have been working collaboratively to set the table for cleanup and redevelopment.

By the end of the year, the port will submit comprehensive planning and zoning documents to the city to launch the formal review and adoption schedule for the Waterfront District master plan. Because the city has been a close partner in the development of all of the documents, the review process should be more streamlined than land-use planning that involves a private developer.

The port in 2005 purchased 137 acres of the former Georgia-Pacific pulp, paper and tissue mill on the Bellingham waterfront, planning with the city for environmental cleanup, remediation and aggressive redevelopment of the site. The redevelopment plan balances urban-scale density with maritime-related industrial uses. 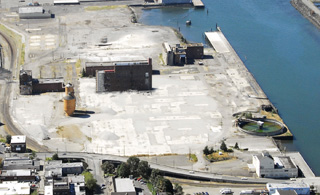 Photo by Art Choat [enlarge]
The Port of Bellingham in 2005 bought 137 waterfront acres from Georgia-Pacific. Most of the industrial structures have been removed and redevelopment is moving forward.

Since that initial purchase, the port and city have weathered changes in administration, environmental cleanup delays and a recession that hit the real estate investment industry especially hard. Now — almost eight years later — the stage is set for the redevelopment of the first phase of waterfront land.

The Waterfront District is a spectacular setting on Bellingham Bay, adjacent to the central business district and close to Western Washington University, the high-end Bellwether hotel, commercial development, and recreational and commercial marinas and marine facilities operated by the port.

Most of the industrial structures have been removed from the site, with the exception of a few of the brick-clad buildings that housed mill equipment. Visually the district is clean and the bay can be viewed from every angle.

At ultimate build-out, anticipated to occur over the next 20-plus years, the Waterfront District could see development of 5.3 million square feet in a combination of commercial, residential, retail and industrial uses. This development would be supported by 33 acres of parks, arterial roads, and imported fill to provide protection from any future sea-level rise.

Mayor Kelli Linville, the fourth mayor since the property was purchased, vowed a year ago that the waterfront planning documents would be complete and ready to hand off to the city within one year of her administration. Helping her is Rob Fix, the newly appointed executive director of the port and third since the property was purchased. Fix’s background in real estate lent itself to finalization of the plans.

Now, the first steps for development are ready.

As part of its contribution to the development, the city will build the roads, bridges, utility corridors and parks; and the port will perform and manage all of the environmental cleanups. Together, the municipalities have created the draft master plan and related documents that will be submitted by year end for planning commission and City Council review.

While the environmental cleanup plans for five brownfield sites (both upland and in-water) have been in development since the purchase, it wasn’t until early this year that actual work started. One site has been cleaned, and the remaining upland sites are poised to begin within the next few years. Ecology is eager to see this work done and is providing assistance to ensure the cleanup is complete and complies with the redevelopment plans.

Earlier this year, the port and city recognized the need for market or developer input into the final master plan.

The selection process for the initial development phase consists of two stages:

• Last month, the port issued a request for information to determine the type and scope of interest for redevelopment of about 10.8 acres as the first stage.

• In the second stage, a request for proposal will be issued in the first quarter of 2013 that will ask developers for more specific plans about development concepts, capability, commitment and timing.

Once the successful developer is chosen from the RFP next year, City Council members and port commissioners will be eager to hear and incorporate their improvements, and the market reality, into the master plan. As this moves forward according to schedule, a developer can expect to have an approved master plan by this time next year.

In only a few more years, all the hard work of the past eight years will be rewarded as the first of the redeveloped properties comes on line.

Lydia Bennett, CCIM, CPM, is director of business development for the Port of Bellingham.