Denny Onslow and business partner Jim Sepic plan to start construction in August on the first project for O&S Partners, the firm they founded this year. It will be a 90-unit apartment complex at 721 E. Pine in Seattle’s Capitol Hill neighborhood.

Onslow was with apartment developer Harbor Properties for 28 years before leaving earlier this year, four months after the Seattle firm merged with Urban Partners.

He was the chief executive development officer there. Now he is the guy in charge of everything, working out of space subleased from a development consulting firm in Pike Place Market. 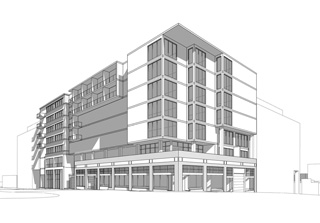 Image courtesy of Hewitt Architects [enlarge]
The first project for O&S is this 90-unit apartment planned at Harvard and East Pine on Capitol Hill.

Onslow said the Capitol Hill apartments will be one-bedroom units and possibly some two bedrooms, averaging 550 square feet with quality finishes. They will be targeted at young people working downtown, at area hospitals and schools.

O&S will incorporate the existing brick walls of a 1920 building on the development site into the new project, and keep the old windows.

It also plans to keep the businesses that are there — longtime tenants such as Bill’s off Broadway restaurant. They will relocate during construction and then move back in with similar lease terms and spaces to what they have now, Onslow said.

That works, he said, because the tenants are flexible and because O&S is willing to take a “little haircut” on the rents. “It’s the right thing to do,” he said.

Onslow said it helps that the Pike Pine Urban Neighborhood Council encourages preservation of older buildings with a program it spearheaded that gives an extra story if the facade of the older building is saved and the new space has similar volume, “so it’s the same kind of feel.”

O&S is looking for other apartment sites in Seattle. Besides Capitol Hill, it likes the University District, Wallingford, Fremont and South Lake Union neighborhoods.

The firm plans to construct wood-frame buildings of six to seven stories, which cost less to rent and are cheaper per unit to build than high-rises, Onslow said. “I would never turn down a high-rise but why not stick to what you know and can chew?” he said.

Jim Sepic provided half of the equity for a number of Harbor Properties apartment projects: the 78-unit Helix and 73-unit Ellipse in the University District; and the 195-unit Link and 62-unit Nova in West Seattle. Sepic and Onslow are putting up the equity for the O&S Partners projects.

The recession pushed down building costs, but now they are rising, so “rents have to go up,” said Onslow. “The only thing that stayed good was interest rates,” he said.

The longtime developer said he thinks the Seattle-area apartment market will remain strong as people are still moving to the city. Seattle is a magnet for educated people and “Amazon still has the for-hire sign out,” he said.

Developers just need to “build smart” in the right places and with units renters want, he said. For instance, as apartments get smaller, they must be more efficient, with things such as more shelf and counter space and niches to put items. Onslow said his firm intends to build that way and with nice finishes, good light, amenities such as bike rooms, and in walkable neighborhoods.

Onslow also expects demand from senior renters who are attracted to downtown’s restaurants, transit, walkable neighborhoods, nice apartments, and being near people of all ages. “It will be the boomers, like Gen Y, that is moving through in larger numbers,” he said. “They’ll meet each other in the lobby.”

He has not started pre-selling the condos, leaving the door open to convert them to apartments if the market dictates that. “I just thought it was clever. It was smart,” said Onslow. “He’s not so bold that he’s not having a backup plan.”