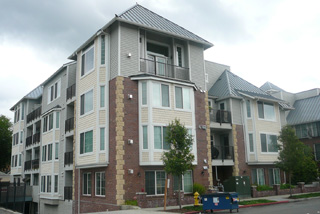 “It’s been a fantastic year for us,” said Debbi Anderson, owner of Real Estate Investment Services.

The family-run business is a one-stop shop for banks that need assistance with unsold foreclosed residential and commercial properties.

REIS cleans up and stabilizes properties, and then leases them out or prepares them for sale. Sometimes that means clearing out squatters or prostitutes, Anderson said.

Anderson said she has a staff of 24 people in three offices — Tacoma, DuPont and Seattle — and a John L. Scott home-sales office in Tacoma with a staff of 40.

Commercial foreclosure activity “is starting to dry up,” Anderson said, but with the economy picking up “commercial leasing has been a huge part of what we’ve done this year.”

“People are getting comfortable opening offices again,” she said.

In the South Sound, where Anderson works, the action hasn’t been limited to Tacoma. The market “has been active everywhere, all over (Pierce County),” she said.

REIS, for example, recently brokered the sale of Narrows Business Park, a 60,000-square-foot office-warehouse complex in Gig Harbor, after first taking control of the property as a receiver.

University Place has been another hot spot for REIS. The company manages the 50-unit Stratford Heights apartments there, which Anderson recently acquired with investment partners.

“If someone can afford to be in your center, it makes a big difference,” Anderson said.

Anderson said she works with outside investment partners to acquire and rehabilitate properties and manage them. The purchases are mostly local, but include a 17,000-square-foot shopping center in Las Vegas.

Banks are starting to loan again, she said, especially for multifamily and retail properties, while office buildings are still out in the cold.

She said she remains bullish on the multifamily market, but noted that cap rates are seeing a steady decline, now down to 6.3 percent in the Puget Sound area, from more than 8.5 percent when the market was at its bottom.

If only to reinforce its jack-of-all-trades vibe, REIS lists among its many services an offer to provide the entertainment for your next big event. Anderson is the lead vocalist for a five-piece band, Blind Blond Driving, which performs 1970s rock classics. She said her highlight so far has been playing at the Hard Rock Cafe in Atlanta for an adult band camp, where Jeff Adams, singer and bass player from Starship, and other rock stalwarts joined in.