Amazon.com’s recent decision to lease another building near its global headquarters in South Lake Union is yet another example of a creative class company recognizing the value of locating in an urban center.

South Lake Union demonstrates a new kind of urban revitalization; one that is contributing to our region’s economy while helping to decrease urban sprawl by concentrating growth in the heart of Seattle. That growth is attracting leaders in technology, life sciences, design and academia, as well as new residential development. All of this is contributing to a highly walkable, engaging and inviting community.

Vulcan is preparing to break ground on a new building in South Lake Union that will accommodate Amazon as the company continues to expand. Amazon Phase VI will consist of two interconnected buildings (five and six stories) along Westlake Avenue North and Ninth Avenue North between Mercer and Republican streets.

Designed by ZGF Architects, the new buildings will house 375,000 square feet of office and 17,000 square feet of retail along the South Lake Union streetcar line. As Amazon and other companies and organizations continue to establish themselves in South Lake Union, and as the neighborhood sees more residential development, there is an opportunity to create standards for smart, sustainable growth that will provide long-term benefits — not just for the occupants of Amazon Phase VI, but for the long-term good of Seattle and the region. 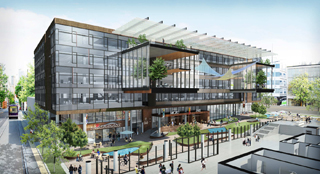 The opportunity to take a measured, thoughtful approach to redeveloping a major section of a city is rare. As such, it is critical we carefully consider our approach to ensure the best outcomes.

Amazon Phase VI represents one type of development that will contribute to South Lake Union’s continued success as a vibrant urban community. The long-term vision for South Lake Union is to develop a blend of building types: a combination of mid-rise and high-rise buildings with a mix of textures and colors — brick, glass, stone and steel — and a variety of uses that include offices, apartments, life sciences and retail. All that would be combined with public spaces and other amenities that activate streetscapes to create an engaging urban experience.

The Phase VI design integrates key factors from city and neighborhood plans, as well as community stakeholders, resulting in a LEED gold design that will activate the street front, encourage alternative transportation, create welcoming public spaces and reduce traffic congestion. Those who work in the Phase VI buildings will find a healthy and collegial space that will encourage collaboration and creativity — hallmarks of Amazon’s success.

For retailers, Phase VI provides an inviting space for shoppers and diners with significant setbacks at the street level and safe and lively public spaces. And for the community in general, Phase VI’s design will help to lower traffic congestion while contributing to South Lake Union’s sense of place.

Phase VI demonstrates these attributes with a design that incorporates larger setbacks from streets to increase the amount of open public space. The project also incorporates retail on Mercer Street, Westlake Avenue and Ninth Avenue in the form of a landscaped pedestrian galleria with retail frontage, cafes, public seating, pedestrian lighting and weather protection that includes covered seating for streetcar riders.

Phase VI is designed with cyclist-friendly amenities, including public bike racks, a bicycle fix-it station, lighting, and accommodations for the future bike share facility planned for the neighborhood. These amenities are intended to continually encourage those who live, work and visit South Lake Union to take alternative forms of transportation to help reduce traffic congestion.

Cars are, however, a reality of city life so the project incorporates many design elements that are intended to improve traffic flow in the neighborhood. Vulcan is seeking a partial alley vacation, which would provide benefits such as improved traffic flow as vehicles would be routed onto Westlake Avenue instead of Mercer Street.

As South Lake Union continues to develop, we look forward to bringing projects to the community that will contribute to a strong sense of place, relieve environmental pressures that come from sprawl and create significant economic benefits. Amazon Phase VI is one piece of the larger puzzle that will help us — and our partners and neighbors — realize this vision.