Across the U.S., the hotel market is good and getting better. More rooms are being sold, and the average rates continue to increase in most areas. The national lodging market continues to recover from the last downturn, and most drivers for the hotel market look good.

The one caution, just as in all previous cycles, is whether new room supply will create problems for the future. Maybe it will, but maybe not! This article will explore the national market, and then our local market in light of these factors.

Two key trends for the lodging industry are gross private domestic investment and personal consumption expenditures. This is not a surprise, as these two indicators measure businesses’ and consumers’ appetite for spending. This has a large impact on their ability and willingness to purchase hotel room nights.

In 2014, these two key national trends have been on the increase, and are projected to continue for at least the short term.

According to PKF Hospitality Research, a CBRE company, by 2015 the national hotel industry will have achieved a fourth year of average nightly accommodated demand that is in excess of the pre-recession peak of 2.8 million room nights. Additionally, it will have six consecutive years of increasing occupancy (the longest streak since 1988), and an occupancy level of 65 percent (the highest level ever recorded by STR, an industry source for historical room demand).

When room demand grows and average rates increase, developers and owners become excited about building. This is a fairly positive indicator for future growth, but it then brings the risk of overbuilding, which could spoil the market.

Financing for new hotels still is challenging, however; there continues to be elevated uncertainty around the hotel market because the past cycle is not yet forgotten, construction costs in many markets are quickly rising, and there is a scarcity of brands that lenders are willing to finance.

All said, these factors have been a restraining force on new development. 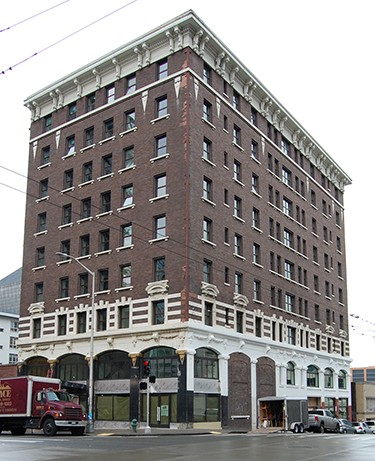 Photo by Benjamin Minnick [enlarge]
Kimpton is converting the Palladian Apartments in Belltown into 97 hotel rooms and suites. The building at 2000 Second Ave. is expected to reopen early next year.

When all of these factors are taken together, PKF-HR projects that occupancy will continue to grow into 2015, to 65 percent, and that the average daily room rate will also increase at above inflationary rates through 2016.

While new supply represents some uncertainty, the economic drivers of hotel demand look good, and the anticipated growth looks sustainable into the near term.

According to STR and PKF-HR, occupancy in the Seattle area increased from 61.2 percent in 2009 to 75.5 percent in 2014. Similarly, the average daily room rate (ADR) increased by a compound average annual rate of 4.1 percent per year, indicating very strong trends.

To put this into perspective, these results are just a little bit less than the results from Portland in the same period, but well above the national averages. If we further factor in PKF-HR projections through 2017, there will be an annual increase in the amount of revenue generated per available room at a compound rate of 7.9 percent, or an increase of 85 percent between 2009 and 2017.

ADR, as reported by STR, shows that the Seattle area increased by 14 percent for the month of September 2014 over the same month of 2013. This is a very large increase, and highlights just how hot this market has become. Very strong numbers!

The increase in demand is the result of several really good things happening in our area.

When we also look at the employers who have entered or expanded in our region, it is an exciting story. The downtown explosion of Amazon and the high-tech hubs around Lake Union as well as the east King County area, are just a few examples of why our region has strong hotel performance results.

In addition, in 2014, the Washington State Convention Center is expected to create a good increase in room nights over 2013, with positive indications for growth into 2015.

With all of the increase in demand, we next turn to supply to see what is planned and under construction. It is not difficult to see that the number of construction cranes is increasing across the region. Many of these cranes are building new hotel rooms. In just downtown Seattle, there are 20 hotel projects announced or rumored that could create as many as 5,000 new rooms. This is a lot, but we also recognize that not all of these projects will be built.

According to PKF-HR, occupancy levels for the city of Seattle will be at 82 percent in 2014 and 2015, with very strong average daily room rate gains. This is in spite of the new supply, and also shows the strength of our market.

In summary, it is clear that things are pretty good and expected to get better. There are no foreseeable threats from the factors that have historically brought an end to the strong market. The economic fundamentals, both nationally and locally, are good; high occupancy levels will provide leverage to push average room rates higher; and record occupancy and strong ADR growth will translate into generous bottom line cash flow results.

One factor we are mindful of is the minimum wage initiatives that are gaining momentum locally and nationally. Changes in the base pay for some of the hotel workforce may impact hotel cash flow. Lastly, while we are cautious about new supply, we also recognize there are restraints on what can actually be built. In short, the market continues to look good, and should continue into at least the near-term.

Scott F. Biethan a senior managing director in CBRE Hotels, and is based the Pacific Northwest region. He is the industry leader for the CBRE Hospitality and Gaming Group for Valuation and Advisory Services.