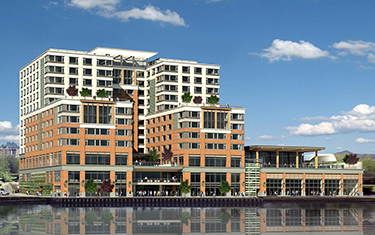 Specialty: Infill and high-end mixed-use projects with an emphasis on residential, hotel, office and retail

Seco Development in October broke ground on a 12-story, 350-room hotel in Renton. The $180 million hotel is part of the larger Southport complex, a 17.5-acre site on Lake Washington that used to be home to a steam plant. The hotel is set to open in 2017.

Seco has already finished 383 apartments at Southport and plans call for future office space as well.

Seco’s Michael Christ sat down with the DJC to discuss the Seaport projects and his view of the Seattle market.

Q: What trends are you seeing right now?

Q: What kinds of sustainable practices are you using in your projects?

A: Some of the sustainable practices we are focused on include: energy-efficient VRF system for HVAC systems; room automation systems that allow for unoccupied set backs and master on-off switches for power; low-flow plumbing fixtures; green cleaning plans; LED lighting systems; and green roof installations.

Q: What is important to keep in mind when putting together a master-planned community?

A: Identify opportunities and formulate a vision that is consistent with municipalities, local neighborhoods, and financial institutions. Ensure the enhancement of our cities while protecting our beautiful and sensitive rural environment.

Q: What is the future in Renton with your Southport project?

A: Southport Hotel is unique to the region and will be the first four-star hotel near Seattle-Tacoma International Airport, which serves 34.7 million visitors per year, a number Sea-Tac expects to double within the next 25 years.

Southport is also ideally located minutes from downtown Seattle, Bellevue, the Interstate 90 corridor and Interstate 405. Its idyllic setting by the shores of Lake Washington makes it one of the most beautiful and accessible locations in Puget Sound. The property has stunning panoramic views of Lake Washington, the Seattle Skyline, the Olympic Mountains, and Mount Rainier. This makes Southport not only a premier location for business travelers, but also a destination location for visitors.

Southport is also the setting of more than 500,000 square feet of office space within two office towers, and more than 2,000 structured parking stalls in the next phase of construction. The vision is to make Southport the first technology hub in Renton.

Due to its close proximity to Puget Sound Energy, Southport has the fastest Internet in the world and redundant power of 100 gigs-per-second fiber. We hope to attract technology incubators in the area. This will boost the economy of the region through job creation, retail, and commercial activity.

People from across the area will want to be a part of Southport with its luxury apartments, commercial space, waterfront hotel and convention center, retail shops and restaurants.

Q: How has your company changed over the last five years?

A: We are growing, adding staff to take on new development projects and looking for sites again. We are adding staff with fluency in Mandarin to add to our focus on the Chinese marketplace, and we are adding staff with office background to push this element within the Seco focus. And we have added construction folks to do value-added repositioning — buying existing apartments or projects.