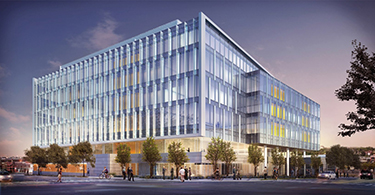 Image courtesy of Perkins + Will [enlarge]
Vulcan’s Allen Institute for Brain Science at 601 Westlake Ave. N. is scheduled to finish construction in the fall of 2015.

Q: How many parcels does Vulcan have left to redevelop in South Lake Union?

A: We still have development capacity for another 5 million square feet on about 20 acres. Our team is actively planning about a dozen parcels now with a combination of commercial office and multifamily residential. We’re excited to be planning some high-rise office and residential towers along Denny Way, and we’re also looking closely at our Lakefront blocks and how to connect them to Lake Union Park across Valley Street.

Q: When does Vulcan expect to be “done” there?

A: Hopefully before I retire! Timing really will depend on the market. We completed our first 5 million square feet in 10 years, so that would be a pretty good guess in the absence of any unanticipated crisis like a debilitating earthquake or losing a major sports team to another metro area. For now, we are making hay while the sun shines.

A: The development plan for Yesler Terrace is ambitious and will attract both residents and businesses, and will create tremendous social and economic benefits for the city. The combination of residential and commercial sites on 30 acres close to downtown, with incredible views of Mount Rainier, Elliott Bay and the city skyline, is unique.

There are other interesting neighborhoods too, like the Spring District and the area just east of Interstate 405 and south of Northeast Eighth Street in Bellevue. For successful implementation, there needs to be a vision and an anchor in the neighborhood.

South Lake Union has a concentration of creative class workers in technology and biotech and some interesting historic buildings and the lake. Yesler Terrace has proximity to the medical institutions, Seattle University and the International District. Other close-in neighborhoods have similar potential, but every neighborhood has different characteristics, so the path to realizing its full potential will differ.

Q: Where will Vulcan’s focus be five to 10 years from now?

A: (Vulcan founder and Chairman) Paul Allen is a Seattle native and he has charged us with making a positive impact here at home. We still have a lot of work to do in South Lake Union and about 650 units of housing to build at Yesler Terrace — I’ve told my team to eat their Wheaties because I think that will keep us very busy for the next five to 10 years.

Q: How is the real estate industry different now from before the Great Recession?

A: Here in Seattle we have fully recovered from the Great Recession, which can be seen simply by counting all the cranes — it is really remarkable — and only four of them are ours!

The real difference though is in the capital markets. Before the Great Recession the 10-year treasury was in the mid-to-high 4 percent range. Today we are hovering around 2.2 percent. With the cost of capital so cheap we are seeing record pricing for many assets, so that has been good for Vulcan because we’ve been sellers.

On the flip side, eventually rates should go up (although we’ve been saying this for years now). Normally that would also mean an increase in cap rates and a decrease in property values. However, continued strong investor demand for real assets and rising rents across most product types should mitigate downward pressure on asset values from rising interest rates.

Q: Seattle’s proposed “linkage fee” has been unpopular with developers. What is a better way to create affordable housing?

A: Just like you can’t build a house with a hammer alone, we won’t solve the affordable housing issue with a single tool. I worry that the “linkage fee” will be counterproductive by slowing the production of housing, which naturally will make rents increase.

We already have some effective funding mechanisms that have created thousands of units of affordable housing (like the housing levy and the Multifamily Property Tax Exemption Program). Why not expand the programs that are working rather than adding more fees that will make housing more expensive for everyone across all income levels?

Q: How much longer can Seattle maintain its pace of development? What are the best- and worse-case scenarios?

A: Seattle has been on fire post-recession, with lots of construction and it has made all kinds of lists — the (Census Bureau) identified Seattle as the fastest growing big city in the U.S. and Seattle made Forbes’ top-10 list for “Best Places for Business and Careers” — so there is a lot of demand for office space and housing right now. Eventually that momentum will taper off, which is normal in real estate.

Best-case scenario? The biotechs find a cure for cancer, creating unprecedented demand for more office and research facilities and housing for all those new scientists.

Worst-case scenario? Amazon decides it likes sunny California better and they pick up and move south.