Drivers behind real estate demand change over time, but one enduring trend reshaping Seattle and other cities is the magnet of urban life.

More and more people of all ages are seeking the vibrance and excitement of the city. The Brookings Institute estimates that 80 percent of U.S. growth in the major metropolitan regions will occur on 5 percent of the land — and we see it every day as different neighborhoods grow and densify.

Our ancestors may have lived off the land and our parents may have seen the suburban single-family home as a castle, but today’s preferred neighborhood has multi-story shops and cafes, pedestrian- and bike-friendly public spaces and good access to transit.

A classic phrase for ideal real estate development — the 100 percent corner — used to be at two freeway intersections in the suburbs, but now it is in the urban center linked to a transit stop. Investors, too, have recognized the trend and are sending more of their dollars into what they perceive as a more durable and safe investment: urban, next to a rail line. 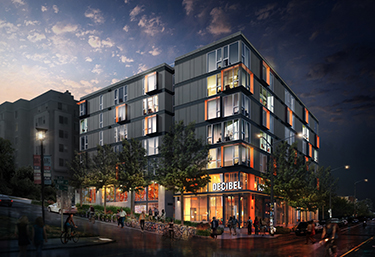 Image by Studio 216 [enlarge]
Spectrum Development Solutions’ Decibel housing project on 12th Avenue between Yesler Terrace and Seattle University will share amenities such as a public bike station with two nearby buildings.

New forces are driving the next iteration of Seattle’s urban fabric, from the well-established areas such as downtown and Pioneer Square to the close-knit, walkable neighborhoods of Capitol Hill/First Hill and the University District, the entirely new mixed-use enclave of South Lake Union and emerging areas such as Columbia City and Yesler Terrace

One key is our region’s foresight in the 1980s to preserve our local farms, working forests, and beautiful ecologically significant landscapes through the Growth Management Act, along with current nonprofit/public/private strategies from innovative groups such as Forterra.

What are some of the other trends attracting people back to the city, after decades of preference for suburbs? What types of urban housing and neighborhoods are attractive to renters and homebuyers? Why are companies pursuing the relatively costlier mid- and high-rise buildings of the urban core?

The drive for downtown living is often credited to the young, but people of all ages find it suits them, even as demographic trends have changed our society and economy.

As the 2015 Urban Land Institute’s “Emerging Trends” observed: “The millennial generation is driving the move back to the city.” ULI’s report also showed Seattle as the number four U.S. metro in attracting urban population growth and a parallel in real estate investment interest — behind only Austin, Texas; Denver; and Charlotte, North Carolina.

Seattle’s urban attraction is drawing a range of ages across the post-college adult workforce. In Brookings’ “State of the Metro” report, Seattle ranks as the nation’s fifth highest metro in the overall likelihood of college-educated adults to live in the urban core. The report also shows more tint of gray downtown, with Seattle’s urban metro having experienced a 45 percent increase in the 55-to-64 year-old population in 2000-2010.

But how does a city grow, and grow well? Sustainability is a constant in the Pacific Northwest, a part of our DNA, and creates an ongoing case study for other cities seeking to accommodate growth while maintaining a livable, environmentally healthy community. We also face plenty of challenges, such as maintaining the economic, ethnic and cultural diversity that gives vibrancy to cities. A city without an ecosystem of diversity cannot be a great city.

Many of Seattle’s urban neighborhoods and product types are responding to these mega-trends. Here are several of the more interesting, transformational and transitional examples:

• Mixed, diverse and transit-based housing. In transformation of housing, few neighborhoods are undergoing as rapid a change within a planned diversity of product type, affordability and accessibility as Yesler Terrace and First Hill.

First, there’s the city’s public housing in Yesler Terrace that is being transformed from the outdated, low-rise, low-quality buildings that were endemic of the nation’s public housing of the past few decades.

Whereas the 30-acre Yesler Terrace today is home to 1,200 people living in 560 apartments, the Seattle Housing Authority is embarking on an unusual public-private approach to rebuilding the aging community with more density that enables creation of replacement affordable housing while integrating new for-profit housing.

This second life for the Yesler area envisions a mixed-income approach creating a more diverse, vibrant community of up to 5,000 residents. And the opening of the First Hill Streetcar line in early 2015 makes Yesler easily accessible to downtown and other job centers. 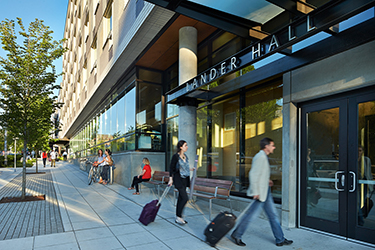 Photo by Benjamin Benschneider [enlarge]
The University of Washington’s Lander Hall connects West Campus to the city with a major ground-floor dining hall that serves both students and the public.

Spectrum is also developing two nearby properties: Decibel and Reverb. The three are in close proximity and will share amenity spaces such as a community “living room” and a bike share station that the neighborhood can also use.

Seattle Housing Authority, using funding from the site sale for Spectrum’s Anthem project in addition to other resources, is developing 103 low-income apartments on an adjacent parcel.

“What we are doing is unconventional for private development,” said Spectrum principal Jake McKinstry in announcing Anthem on 12th. “I am excited at the prototype we are bringing to Seattle both in workforce housing and untraditional shared spaces. By creating shared amenity spaces and programming between the three dispersed buildings we hope to foster community and resident connections that go beyond the walls of a single residence.”

• Offices designed for today’s urban workforce. Significant office innovation is underway in Seattle as well, exemplified in the “instant neighborhood” of South Lake Union largely created by Vulcan Real Estate and other developers, and the slowly evolving transformation of Pioneer Square, once one of Seattle’s bustling business areas.

Among many signs of resurgence in Pioneer Square is the five-story historic 619 Western Building that was rehabbed and is fully leased to two tech firms, and Urban Visions recently started work on its 200 Occidental mid-rise structure where Weyerhaeuser will move its headquarters.

Why are developers and corporations revitalizing Pioneer Square and rapidly leasing South Lake Union? It’s because employers know that today’s well-educated and mobile employee wants to be in active urban neighborhoods.

In announcing the planned relocation of 800 employees to the 165,000-square-foot 200 Occidental building, Weyerhaeuser CEO Doyle Simons said moving there will help the company compete for talent now and in the future.

• Educating the urbanists. As more people move to and stay in urban Seattle, it also puts demands on educational facilities, whether K-12 schools serving young families or higher-ed students at the University of Washington.

With the 401 East Pike Building on Capitol Hill, The Northwest School took a former parking lot to create a 38,000-square-foot building with dynamic space for gathering, learning and playing that has a league-size gym, 175-seat black box theater, two-tiered dining room, and a 6,000 square-foot rooftop sports field.

“Urban schools are a cornerstone of the future of livable cities,” said Rich Franko, Mithun’s principal-in-charge of the design. “The Northwest School facility presents an ideal opportunity to further develop the educational environment in the urban fabric, reinforcing the school’s culture as the campus evolves.”

In addition, the soon-to-be-realized downtown public school in Seattle is also representative of the emerging demand, driven by new families in the urban core. 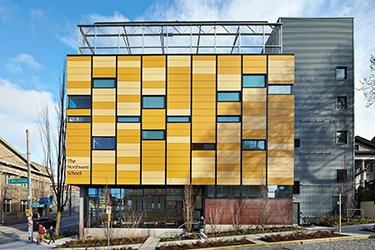 Photo by Benjamin Benschneider [enlarge]
The Northwest School turned a parking lot into an urban school that stacks a rooftop sport field on top and a gym, theater and dining room below.

Meanwhile, the University of Washington is accommodating significant enrollment growth with its $200 million West Campus residence hall expansion designed to attract students who seek exciting urban environments, while also creating a complementary neighborhood that worked with existing commercial and residential uses nearby.

Among the latest of several student life facilities to open is Lander Hall, with Terry and Maple halls on the way. These buildings and integrated outdoor spaces create a heart for West Campus — fostering connections between students that enhance the vibrant nature of the campus experience.

Lander, Terry and Maple halls reconnect the street grid and improve the pedestrian experience in the West of 15th neighborhood, making local businesses more accessible. A major ground-floor dining hall serves students and the public alike — contributing to a vibrant street life and encouraging connection between campus and city.

Across these and many other examples of urban design and development, Seattle continues to evolve as one of the most desirable cities in which to live, learn, work, shop and play. Through innovative planning and development — steeped in sustainable concepts and the experience of “what works” — it will continue to be one of the world’s great cities for generations to come.

>Bert Gregory, FAIA, LEED Fellow, is chairman and CEO of Mithun, an integrated design firm with offices in Seattle and San Francisco. He is incoming board chair of Forterra, a nonprofit that preserves landscapes, while building prosperous, equitable and vibrant communities in Washington.