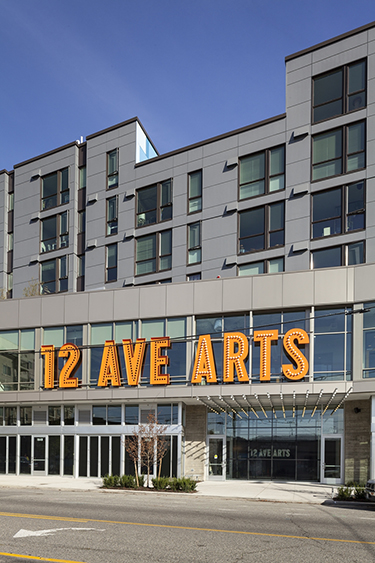 Photo from Capitol Hill Housing [enlarge]
12th Ave Arts on Capitol Hill will have 88 low-income apartments and space for offices, retail and the arts.

Projects: 12th Avenue Arts on Capitol Hill, with 88 low-income apartments, 26,000 feet of office, retail and arts; The Haines, a 30-unit preservation project at 1415 E. Olive St. with very-low-income housing for the elderly and people with disabilities

Christopher Persons is CEO of Capitol Hill Housing. He answered questions from the DJC about his organization.

He said CHH was founded in 1976 as the Stevens Neighborhood Improvement Program when areas of Capitol Hill were redlined by banks and real estate companies and people could not get home improvement loans. The improvement program provided the loans.

CHH operates 49 buildings in Seattle with a concentration on Capitol Hill, the Central District and downtown. The properties have 1,398 apartment units and 67,000 square feet of commercial and office space.

The buildings are new and preserved, and are primarily financed using Low Income Housing Tax Credits and public and private debt.

Here is what else Persons said:

Q: CHH responded to an RFP for developing land around the future Capitol Hill light-rail station. What’s the potential? What are the challenges?

A: The potential is in shaping the heart of a great neighborhood, maximizing housing, providing affordability in a community no longer affordable and building a vibrant transit-connected community.

The challenges? I think anytime the process for selecting a developer for a project is overly prescribed, it diminishes the creativity of the design and development team to solve problems.

There’s also little rationality in land costs on Capitol Hill right now, which makes every project complicated when there is a significant goal for affordability.

Q: How do you define affordable housing? Should the government foster more of it?

A: There are lots of ways to define affordability: Paying no more than a third of your gross income on housing costs is the main one. We typically build housing for people who make 60 percent of the area median income or below because we’re mission based and that’s what our public funders require.

What more can government do? I have been saying it takes all available resources. The Seattle Housing Levy, tax credits, State Trust Fund, U.S. Department of Housing and Urban Development funds, and the Multifamily Tax Exemption Program are the predominant existing tools.

Public lands need to be made more readily available for affordable housing. Mission-oriented investment funds that require lower returns can be used by nonprofits as well as for-profits for development of the housing. And Seattle has to catch up with the rest of the country on linkage fees. The city should also stick to their guns on housing types that create affordable options and density, like small-unit housing and row houses, and they should slim down design review.

Q: Should low-income housing developers work together to achieve efficiencies?

A: Low-income housing developers do work together and CHH works with for-profit guys too. We are proposing to co-master develop the Capitol Hill TOD with the for-profit Jonathon Rose Companies and are buying with JRCos. Squire Park Plaza, a development with 59 apartments and 11,000 square feet of retail and office space in Seattle’s Central District. The seller is the Central Area Development Association.

We currently manage all CADA properties and are looking to support their work in the Central District. We also partnered with Bridge Housing on our response to Building Nine at Sand Point.

Q: In 2011 the Bullitt Foundation awarded CHH a grant to head the creation of an EcoDistrict on Capitol Hill. How is that going?

A: The EcoDistrict is taking off. Bullitt has provided follow-up funding to that original grant and we’ve received funding from other foundations and public sources, including the city. We’ve formed a steering committee, hired a director for the program, Joel Sisolak, and expect the city to pass a resolution establishing the EcoDistrict in a formal way in early 2015.

We have set metrics and sustainability goals for the district and have kicked off several projects including a community solar project with City Light and a shared-parking study funded by King County.

Q: Has CHH considered the aPodment model for future developments?

A: This is not our area of expertise, but we continue to explore models that require lower public support and would consider partnering with the right developer on many types of developments including small-unit buildings.

Q: What are trends in affordable housing locally?

A: I’ve been in this market for seven-plus years and ever since then I’ve heard that we would see contraction in the segment through mergers, acquisitions and formal partnerships. We have been seeing this recently and I suspect we’ll see more. For example, Bellwether acquired Common Ground, Compass merged with Latch in 2009, and we have begun managing CADA properties.

Everyone is seeking different financing sources for affordable development but there’s no secret sauce. Development costs are fixed. We, like everyone else, work to squeeze every efficiency out of a project, but the hard cost per foot is going to be what it is.

To keep rents down then requires low-cost or no-cost equity. The total rent potential at 12th Avenue Arts is about $1.1 million less per year than what a market-rate developer is getting on Capitol Hill. We’ll keep it affordable for 50 years, so we’re talking a huge amount of revenue left on the table with limited recap opportunities because we can’t sell to anyone unless they maintain affordability.