I’m a fisherman. My favorite fish is salmon, which you can catch either in salt or fresh water rivers.

Two years ago I was on the Cowlitz River in southern Washington in the spring, fishing off of my buddy’s river sled for Springers, the spring run of Chinook salmon.

It was a beautiful sunny, crisp day and we didn’t catch one fish. The guides working their own boats kept telling us, “You should have been here yesterday; fish were in.”

Gauging the ebb and flow of the South Puget Sound industrial market sometimes feels the same way. Some days, tenants and investors are all over the market looking for space. Six months later they are either gone or the activity has changed locations — just like the salmon swimming down the river to a different fishing hole.

In the first half of 2012, there was a surge of tenants looking for large spaces in our market. They all wanted modern Class A distribution space over 200,000 square feet, also known as big-box buildings. The challenge for all practitioners in the market was that, because of the Great Recession, no new construction had taken place in the preceding four years that wasn’t pre-leased or sold to a user.

There was very little new Class A supply to meet this increased demand. Investors and developers were caught with no lines in the water as the fish came in the river.

But that changed quickly.

Construction of new Class A big-box buildings began in earnest in 2012, with resulting deliveries of 2.2 million square feet in 2013. Because the fish were in the river at just this moment in time, these projects are 89 percent occupied today. 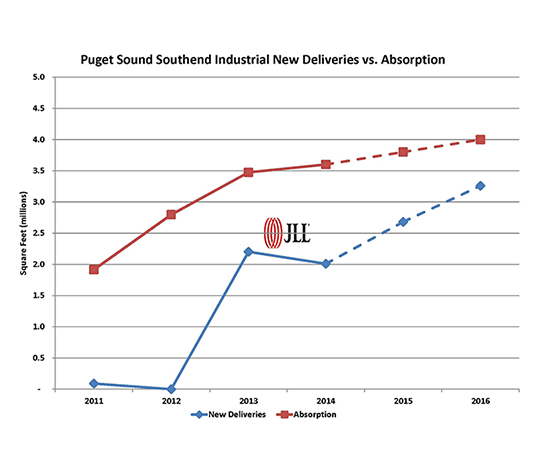 [enlarge]
New industrial space is expected to increase faster than absorption over the next two years. 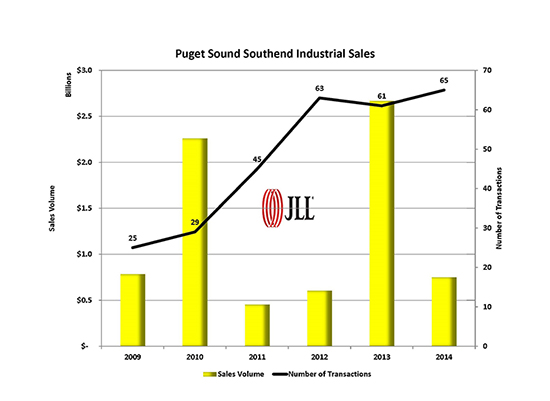 Chart from Jones Lang LaSalle [enlarge]
The number of industrial sales has picked up dramatically since the recession.

Developers and their capital partners saw the strength of the Puget Sound economy in 2013, which had significantly better employment growth of 2.8 percent versus 1.7 percent for the U.S. as a whole, according to Blue Chip Economic Indicators. Positive changes continued in 2014 with year-to-date annual changes at 2.7 percent versus 1.8 percent.

Developers and their partners responded to the positive news by pouring investment capital into local industrial markets. The result is another 2 million square feet of new Class A product delivered in 2014. This slate of buildings is 30 percent leased; an impressive number, as the projects were just recently completed.

One thing a fisherman can always count on is the enthusiasm of others when they see you are catching fish.

We expect an additional 2.68 million square feet of new Class A product to be delivered in 2015 with an estimated 51 percent of the space committed. That’s what one would call “fish in the boat.”

Because of this robust tenant activity, the surge of new product to be delivered in 2016 is estimated at over 3.25 million square feet.

With all this discussion of 2 million to 3 million square feet of new product, one might ask what the demand looks like.

Well, the fish are in the river right now.

No wonder the vacancy rate in this market has dropped from 7.4 percent at the beginning of 2011 to 4.2 percent today.

For the fisherman, a series of rainy days following a dry spell can mean the fish come roaring up stream.

The dry spell for the world economy began in late 2008. But just like the positive changes in water flow in a river after a big rain, the economy healed and investors came roaring back.

The industrial real estate report for 2014 is excellent. Coincidently, the salmon season report for Washington coastal and Puget Sound waterways this year was also excellent.

A good day of fishing feels just like this busy market does right now. Fish on!