Highlight stories of 2014 must include the continued resurgence of apartment development and talk of the possibility that we are entering “bubble” territory.

Interestingly, and not too surprisingly, this is a subject that places people firmly on one side of the fence or the other. On one hand, there are those out there who steadfastly believe that the market has an almost infinite capacity to accept as many units as can be built and that the millennial generation will happily occupy as many units as we can create.

On the other side of the argument are the naysayers who are adamant that the astounding number of new units that are both planned as well as under construction — in concert with the seemingly endless run up of rents — simply must come to an ugly conclusion at some point down the road.

So who is right? Are we on the cusp of another real estate meltdown or are happy days here to stay?

First, we need to ask: “How many units have actually been built?”

To get to the bottom of this question, it is worthwhile to look back into history.

Development of new apartment units since the end of World War II has followed fairly predictable cycles, with booms followed by periods of slower activity. What is very clear, however, is that the current development cycle is at historic levels and that we will be bringing online an unprecedented number of new units over the next two years when compared to historic norms.

Score one for the bubble believers!

A second point that the naysayers make is that all of the development is occurring downtown and that this is untenable. Now, it is true that our downtown market has seen resurgence, but this is not a recent event. If we dig a little deeper into the data we can actually see what is really happening.

When we look back on the development history of apartments over the past 10 years we can see that the central Seattle market area has brought online almost 40 percent of total new supply. This is not surprising as lack of infrastructure development (think long commutes), together with demographic shifts, created demand for downtown dwellings. 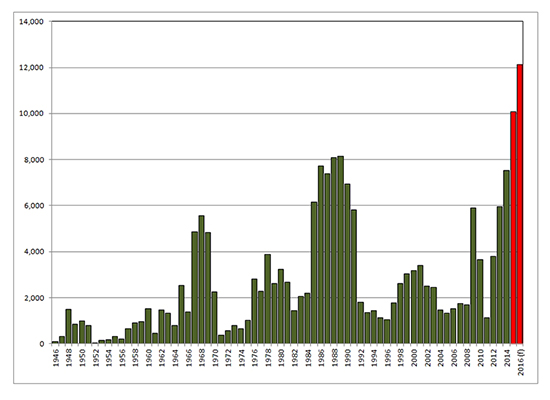 [enlarge]
Development of new apartment units in King County has been cyclical. The next two years will see an unprecedented number of units come online. Source: Gardner Economics; Dupre & Scott

Nearly 40 percent of new apartments in King County were built in central Seattle over the past decade.

Central Seattle’s share of new apartments in the next two years is expected to drop 4 percentage points.


Now, when we look at the new deliveries over the next two years, although we are likely to see close to 8,000 new units in the central Seattle area, it is actually a smaller percentage (about 36 percent) of total units than historic averages.

We would also note that, in percentage terms, production is scheduled to increase over the next two years on the Eastside and in North King County, whereas percentages drop in central Seattle and in South King County.

So what does this all mean? In as much as new supply is certainly at historic levels it’s clear that, so far, demand has pretty much kept up. But will that continue to be the case?

As a good friend of mine once opined, “I can guarantee that every apartment unit that is built will be rented. What I can’t guarantee is what the rent will be!”

When it comes to our downtown market it is clear that many developers are banking on continued growth at Amazon. After all, with the possibility of the company occupying over 10 million square feet of space in Seattle by 2019, the reported 71,500 employees will have to live somewhere!

However, supply is certainly scheduled to burgeon over the next few years and this will make the market more competitive and likely lead to some compression in rental rate growth as developers charge to get their projects to market and occupied.

Reliance on the 475,000 members of the apartment-consuming millennial generation that live in King County is a positive; however, rents in some sub-markets are getting into rarified air. Is this a bad thing? Not necessarily, as I believe that there will likely be a ripple effect that will drive some to live farther from downtown where rents are at least somewhat cheaper which will, in turn, assist in lease up of those ex-urban projects.

Unless we see significant income growth in our region, the frenetic pace of rental rate growth is likely to slow, but not stop, as we deliver this next round of new product. Happy days may not be here to stay but, for now, there is still reason to smile.

Matthew Gardner is a Seattle-based land-use economist and principal at Gardner Economics.