Amid the ongoing construction frenzy of Seattle, the city also has its own plans for reclaiming the waterfront and upgrading its transportation network to meet the changing needs of its citizens.

For the new waterfront to be successful as a public space, secure connections extending into the neighborhoods will have to be forged for walkers, bikers, wheelchairs, hoverboards, kick scooters and strollers. With fixed rights of way in the downtown core, the transportation network will have to accommodate more people in the same amount of street width.

The first phase of improvements, called "Pike Pine Renaissance: Act One," aims to do both by making investments in the streetscape along Pike and Pine streets up to Capitol Hill.

Because of Pike and Pine streets' gentler topography and the location of iconic destinations along them (Pike Place Market, Westlake Park, the retail core including Nordstrom, Washington State Convention Center and Melrose Market), this corridor has long served as the dominant east-west connection to Capitol Hill and the neighborhoods beyond.

Though cruising downhill at the speed of traffic during the morning rush hour can be thrilling for some, the fragmented and sometimes daunting experience for the average walker or less-confident bicyclist — forced to cross lanes of traffic — prevents many from enjoying an active way of using the corridor. 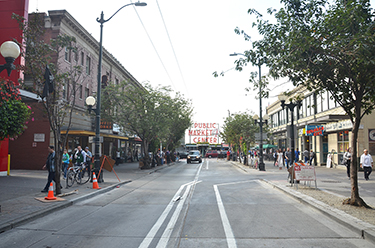 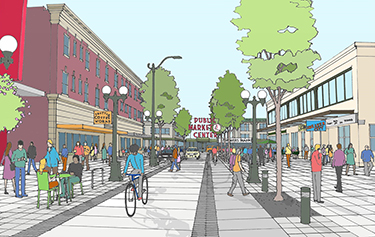 Images from ZGF Architects [enlarge]
Pike Street would be reconfigured as a shared street between Pike Place Market and Second Avenue.

In recent years, employment growth and an influx of new residents have resulted in downtown streets teeming with pedestrians and bicyclists. Seattle's population has grown by 21 percent since 2006, according to a Seattle Department of Transportation report released last year. Yet during the same period, vehicle-miles driven fell by more than 3 percent.

With residents shifting their trip choices to transit, walking, biking and carpooling, 95 percent of new trips created by the cityâ€™s 45,000 new workers were absorbed without adding cars to the road.

With more people relying on Seattleâ€™s downtown streets for mobility, the impetus for vibrant, inviting and safe experiences for people on foot has never been greater. For us as urban designers, the mission is simple: to make Pike and Pine consistently great public realms.

Back in 2014, the Downtown Seattle Association with GGN opened the gates to potential transformations of the Pike-Pine corridor with a series of recommendations to enliven the pedestrian experience. Since then, the Office of the Waterfront and ZGF Architects have been tasked with developing priorities for a streetscape improvement project and building consensus with overlapping projects.

The convention center expansion, One Center City and its coordinated effort to implement Center City Bicycle Network, the First Avenue streetcar, and ongoing investments in private property, will all impact Pike and Pike streets, and if coordinated well, could magnify the catalytic potential of the streetscape project.

An initial analysis was followed by feedback from a property owner and business owner advisory group (the Sounding Board) and two community public open houses. With this advice, the design team arrived at the idea of focus areas to make transformational changes and repetitive elements for the entire corridor to provide continuity and improve the experience. 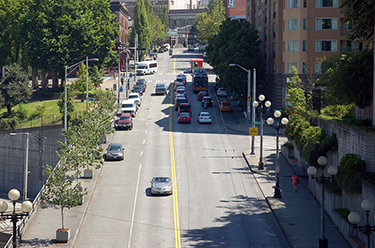 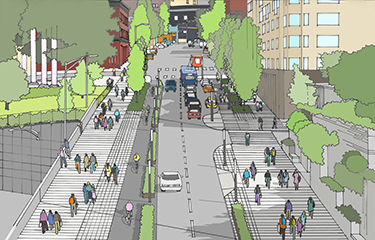 Images from ZGF Architects [enlarge]
Crossing over I-5 by foot and bike would be enhanced with wider sidewalks and dedicated bike lanes.

At the east end, the Interstate 5 bridges, seen as a barrier by many, will be modified with more sidewalk space and dedicated bike lanes. The confluence of potential I-5 bridge improvements, the convention center expansion and its public benefits package, and the objectives of the One Center City Bike Network, led to the possibility of extending the one-way couplet of Pike and Pine farther east so that circulation can be simplified and more space can be attained for safer and pleasant sidewalks and bike lanes.

At the west end, the pedestrian-dominated zones of Pike Place Market and the scramble at First Avenue and Pike Street will be extended up to Second Avenue as a shared street. The energy of Pike Place Market already spills over the curbs with pedestrian activity at First and Pike. The arrival of the streetcar and addition of new hotels will only add more people to that block, confirming the need for a pedestrian-emphasis space.

Over the whole 23 blocks, elements of continuity, such as two-globe light fixtures, planted buffers for bike lanes, and enhanced paving at crossings will provide a consistently improved experience and a message that Pike and Pine are special corridors.

Construction of these Pike Pine Renaissance: Act One public realm improvements could begin in 2020. This effort by the city to improve the walking and cycling experience and add more open space will breathe new life into our streets, complement the investments in transit infrastructure, and perhaps entice more people into a choosing a healthier way of getting to and from work every day.

Heidi Bullinga and Brian McCarter are urban designers with ZGF Architects, part of the design team working with the city of Seattle, Waterfront Seattle and the Downtown Seattle Association to develop a conceptual design plan to enhance the streetscape on Pike and Pine streets between First and Fourth avenues.