Over four millennia ago, the Romans found themselves in prosperous times, conquering lands and converting cultures. Around 2,400 BC, they stumbled across the city of Palmyra (modern-day Syria) and lore of the Palmyran “gny” — a benevolent and watchful guardian angel.

In addition to conquering lands and showcasing vast spectacles of human feats, the Romans enjoyed little more than Romanizing vernacular into Latin. Gny became genii, or, in today’s parlance, genie.

Adaptations of the story of genies took twists and turns over the centuries, and our modern version of the genie, a la Arabian Nights, converted benevolent watching over into active wish granting. The fairytale world of Aladdin leads to the oft-asked fantastical question: What would you do with three wishes?

Turning to modern times — specifically regional real estate economics — how best would one make use of three wishes to ensure strong economic fundamentals?

If you are the genie-releasing patron of the Puget Sound of whom we speak, please stand up and receive thanks.

Despite the doldrums of the Great Recession, by mid-2012 the Puget Sound region replaced all jobs lost in the economic downturn. Economists predicted strong job growth, but not even economists’ optimistic predictions could match the work of our region’s deft genie!

During this time, the rest of the nation began to recover from the Great Recession in the form of stabilized unemployment. Yet, our genie struck again with a lucky “fourth wish” — wage growth! Adding jobs may help to ensure economic stability, but increasing wages supercharges overall economic growth.

Why? Quite simply, growth in high-wage-earning professions.

Adding a massive number of jobs to the region — while paying higher wages year-over-year — sets the perfect stage for robustness in the region’s apartment market.

Back in 2010, before our metaphoric genie got to work, several of the region’s apartment developers quietly picked up development sites and dusted off plans that seemed no more useful than drink coasters just a year prior. As the Seattle region clawed back the jobs it lost in the Great Recession, more and more apartment developers got to work. And work they did!

Between 2010 and 2017, apartment developers delivered more than 55,000 units to the region, with more than 36,000 new units delivering in the last four years alone. However, the best is yet to come. 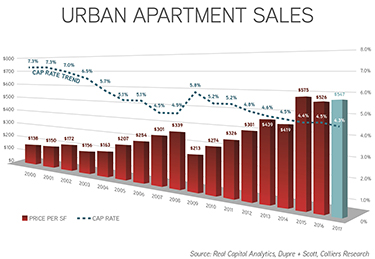 The development of new apartment units within the region is not evenly distributed. Early in the expansion cycle, nearly 85 percent of new apartment development occurred in core, urban-located neighborhoods. However, that trend is beginning to moderate. As developers seek new locations — driven by both the economics of development and demand within each submarket — the balance between urban and suburban locations nears a 70 percent urban to 30 percent suburban split.

The development of more suburban-oriented apartment buildings demonstrates an evolution in thinking beyond simply location. Building unit mixes, unit configurations, finishes and amenities illustrate a continued urban theme, even in otherwise-suburban locations. The desirability of walkability and transit orientation are themes not just reserved for urban-located apartment buildings.

Rent growth outside the core

The story of the region’s recovery from the Great Recession dates to 2012 — already five years in our collective rear-view mirror. As job growth picked up in downtown urban centers in Seattle and Bellevue, so did rental-rate growth. Competition for apartment units increased as job openings filled. With higher wages came greater ability to pay higher rental rates, yet many renters found themselves priced out of these core markets

As renters fled urban markets seeking more affordable rental options, they did so in concert. Soon competition for the same apartment unit — and higher rental rates — occurred outside urban neighborhoods. Looking back on trends in rental-rate growth, the highest cumulative increases in rental rates are now found in suburban markets.

The analysis of 12-month, three-year and five-year rental rate growth trends tells a story of robust apartment demand across King and Snohomish counties, but it does not tell the whole story. Rental rates may increase year over year, but if they do, they do so at the cost of occupancy. Such growth could mislead some to conclusions regarding the health of the market.

Accordingly, the best analysis is one that accounts for rental rates, vacancy rates and new development, providing a more accurate picture of market stability, as well as trends from the past and into the future.

Our region’s urban markets require such a holistic analysis. Since 2010, urban markets experienced the delivery of more than 36,000 new apartment units, while experiencing strong rental-rate growth and vacancy rates steadily below 4.5 percent.

The past, however, is no measure of the future. With nearly 50,000 new apartment units planned in these core, urban-located submarkets, one must ask what our benevolent job-growth/wage-growth genie has up its sleeve.

Fortune tellers we are not, but we can pay close attention to absorption of office space in downtown Seattle and Bellevue. We count over 4.5 million square feet of signed office leases that require filling with new high-wage employees. That’s quite a bit of demand for apartment units between now and 2020.

The race to own

It’s not just office workers and apartment residents racing to Seattle and the Puget Sound region. Apartment investors continue to see our region as both a growing market and haven as the current economic cycle enters extra innings.

Pricing to acquire apartment buildings continues to impress on nearly every metric: capitalization rates, price per square foot and price per unit. The recent uptick in treasury rates will ultimately place upward pressure on capitalization rates; however, an inflationary environment often leads to rental-rate growth.

Looking at the last seven years of sales of urban-located apartment buildings tells a story of rocket-fueled momentum in the market. There is no doubt that 2015 marked penultimate investor demand, and a concomitant peak in pricing. Since that time, the market tempered, but not quite cooled. Do not expect the market to cool — just a digestive pause.

Trees don’t grow to the sky, and extra-inning games still must end. Yet, there are rare circumstances where economies jump strata, skipping one level up to the next. Here in Seattle, now is that very special moment in time.

Meteoric growth will temper — and I submit that we’ve already experienced some such tempering. Over the course of the next several years, certain asset classes and geographies will perform at differing rates of growth based on very elemental supply-demand fundamentals. After that time, expect yet another bull-run as we continue on our way to a seat at the table as a Top 10 global city!