Here’s how to solve the condominium conundrum

The affordable housing crisis is one of the more perplexing problems facing rapidly growing cities like Seattle.

One of many prospective solutions to this challenging problem could be found by increasing the supply of smaller, more affordable condominium units.

According to a 2016 white paper published by the University of Washington Runstad Center for Real Estate Studies: “Condominium development could provide an affordable in-city option for new housing. At present, condominiums are not being built in sufficient numbers to meet demand, and those that are being built are being sold at prices that are beyond the means of the average-income individual.”

In Seattle and the greater Puget Sound area, very few condominiums have been constructed in the current real estate cycle. What accounts for this anomaly?

Demand for condominium units has far outstripped supply, and prices have subsequently skyrocketed, so why have most developers chosen to construct apartments instead of condominiums? 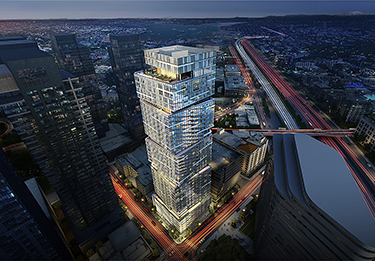 Images by Weber Thompson [enlarge]
Nexus is one of the very few condominium towers under construction in Seattle. Scheduled for completion in late 2019, the project is developed by Burrard Development of Vancouver, B.C., and constructed by Skanska.

According to the Runstad Center study: “Reasons for this dynamic include financing and capital markets, insurance coverage, and to some degree, legal liability for condominium developers.”

All three of these reasons are valid; another is that some developers have found willing REIT buyers that will pay top dollar for completed apartment projects. However, in this writer’s opinion: the liability category is the primary reason for the lack of recent condo development.

When it comes to the debate of condo versus apartment development, we often hear this from our developer clients: “Why would I want to buy myself a guaranteed lawsuit?”

The reason for this sentiment is that indeed, for virtually all condominium projects built (no matter how well built) the developer is served with a massive lawsuit right at the four-year mark after completion of construction, with no real “right to cure” (i.e. ability to resolve any legitimate construction defect issues amicably).

There are many reasons for this fourth-year phenomena, the first is the way the state Condominium Act is structured; the second most salient being the aggressive behavior of some plaintiff attorneys who approach HOA board members at this four-year mark to convince them to initiate a construction claims lawsuit.

They say that fear and greed drives the stock market; one could also say that these two behavioral traits drive the world of condominium litigation.

Having served as an officer on three high-rise condominium HOA boards over the span of 12 years, I have seen the machinations of fear and greed firsthand: 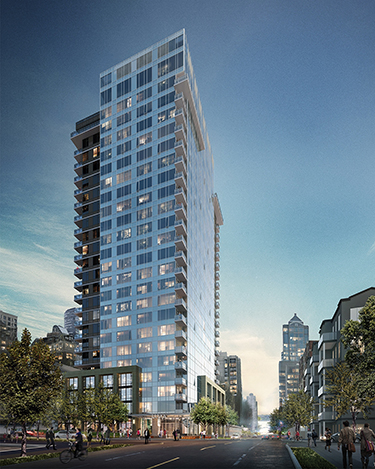 [enlarge]
Luma is one of the very few Seattle condominium towers constructed in the current development cycle. The project sold out prior to completion in 2016. It was developed by Lowe Enterprises and constructed by Lease Crutcher Lewis.

• Board members are informed by the more aggressive plaintiff attorneys that if they do NOT file a lawsuit against the developer, they will be held personally liable for any real or perceived defects — to the likely tune of millions of dollars. While this “fear tactic” is almost always successful, the premise is not true as the Washington Condominium Act exempts HOA board members acting in good faith from personal liability.

• What some plaintiff attorneys fail to tell HOA board members is that for the duration of the litigation (and a bit beyond) a very expensive three-year lawsuit will bring down their property values, and in some cases, make it impossible to sell their units because many banks will not lend on a property that is facing an expensive lawsuit.

• They also fail to inform their clients that after the attorneys take their “cut” of the winnings (in some cases up to 40 percent) in combination with the very expensive obligatory expert witness fees, there may not be much left.

The resultant mega-lawsuit can be extraordinarily costly in time and dollars for all parties.

And while many of the defendants in such cases are ultimately relieved of liability at the end of litigation, the cost of having to defend non-meritorious claims often runs into the hundreds of thousands of dollars.

Is there a better way to address legitimate construction defects without protracted litigation that is costly and painful to both plaintiff and defendant?

The answer is yes, but it requires substantive changes to our state condo law to mandate alternative dispute resolution and grant a true “right to cure” of any legitimate construction defects. Finally, this issue needs to be addressed at the insurance level.

The Runstad research paper studies four other states as well as the Canadian province of British Columbia to compare their laws against elements of the Washington Condominium Act that create untenable liability for condominium developers.

One of the strongest recommendations suggests that: “The Mayor’s HALA (Housing Affordability and Livability Agenda) committee report suggested that revisions to the current insurance regime may remove barriers to developing affordable condominiums, citing the British Columbia warranty insurance program.”

A warranty insurance program similar to that found in British Columbia would also allow the “weeding out” of non-meritorious claims — outside of the courtroom.

Changes to the Washington Condominium Act are sorely needed to incentivize developers to build more affordable condominiums. As long as the economic opportunity for developing condos fails to offset the risk of “automatic” litigation and non-meritorious claims, we will continue to see a diminution of this much needed housing stock.

Blaine Weber, AIA, is director of the High-Rise Design Studio at Weber Thompson in Seattle.