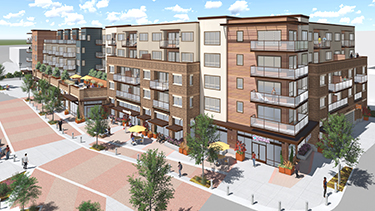 Rendering by Johnson Braund [enlarge]
Voda Apartments in downtown Kirkland, a 128-unit development with 13,000 square feet of retail, will be complete in March.

Projects: Voda Apartments in downtown Kirkland; 137-unit Lux Apartments, a block north of Bellevue Square, will be done in July; 80-unit 2nd and John Apartments on Lower Queen Anne in Seattle will finish in December

Q: You have been doing a range of projects, from low-rise to high-rise, in a number of cities locally. What is driving those decisions, and do you plan any more condos?

A: We focus on developing apartments in core locations where the jobs and amenities are, such as downtown Seattle, Ballard, Kirkland and Bellevue.

As an example, we developed the 314-unit Tower 12 Apartments recently on Second and Virginia in Seattle, given the proximity to Amazon and the CBD, plus the terrific water views. As a reference to the strength of the Seattle apartment market, when we sold the property in 2017, it was third highest on a price per unit basis ($717,000) for the year, nationally, trailing only sales in New York and Los Angeles ($1 million per unit and $885,000, respectively). This statistic really highlights Seattle’s rising position and prominence in real estate values and generally, nationally and internationally.

We are not currently developing condos due to potential condo defect claims and the general heightened risk of condominiums.


Q: What is the biggest issue facing development in Seattle?


Q: Near-term where do you expect growth in real estate development and investment in the region?

A: I’m hearing more and more that developers from outside the region are looking at building condos in mostly Seattle and Bellevue. Coming from other markets such as Canada or Asia, it must strike these developers as odd that there is such a low supply of condos, especially given the strength of our regional economy. They therefore feel it’s a good opportunity, especially compared to their very competitive home condo markets. However, none of the local developers who built condos in the last cycle in our region are developing them again due to condo liability issues, and the greater business risk associated with condos.


Q: Should Seattle pass more rules to prevent residential high-rises from being bumped up against by other high-rises?

A: This is a very tough question. There needs to be a balance between having appropriate spacing between towers, and allowing land owners to develop their sites. In certain zones, once a high-rise has obtained a master use permit (MUP), the neighboring properties may be denied their development potential, and it’s therefore a race to the MUP. A balance between the two goals needs to be realized, as it’s tough to pick one over the other. However, every block has different circumstances and varying solutions, so it’s tough to pass blanket rules. Not sure I have an answer for this one, as it’s really case by case, from my experience.


Q: What should Seattle and Bellevue do to create more affordable housing?

A: We all agree that more affordable housing is needed in the core areas to serve those citizens that may be in the lower pay scales. I think that the current programs of developers providing some percentage of units as affordable or paying fees in lieu of is a practical solution to a complex problem. Many developers have also provided more affordable product by designing smaller and smaller units that result in lower monthly rents. This has occurred in other large and growing metropolitan cities in the world, where people live in smaller homes, but avoid lengthy commutes, and can be part of the fiber of the city (in Vancouver, B.C., they build 600-square-foot two-bedrooms!).