Seattle retools for the future at Fifth and Virginia

Never before have cities across the country been the focus of so much population growth. People across age spectrums are increasingly moving downtown, opting instead to rent apartments that are closer to employment opportunities, nightlife and social amenities. Urban residents are attracted by convenience, too, looking to avoid long and miserable commutes often monopolizing their free time before and after a day of work.

Today's downtown resident also wants to be part of the action and participate in the cultural exchange afforded by urban density and public-space development. A recent study by Victor Couture of UC-Berkeley and Jessie Handbury of the University of Pennsylvania supports this notion.

The urban-economics scholars discovered that a wide range of demographics, particularly recent college graduates, have a great fondness for downtown amenities — music venues, theaters, bars, restaurants, gyms and retail, to name just a few. These services are not new to downtowns, but now there is a more immediate need for the younger generation to live near them, a trend this study found will likely make urban revival more durable for generations to come. 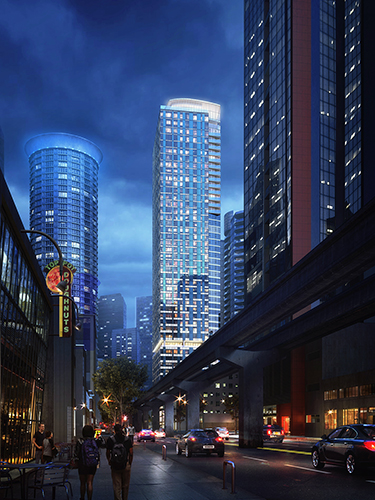 Image from Douglaston Development [enlarge]
5th & Virginia, a 47-story tower, will have a public rooftop restaurant and bar. 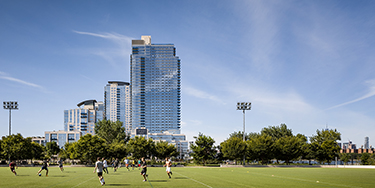 Photo by Alex Severin [enlarge]
The Seattle project will mirror the mix of uses and collection of public-gathering spaces seen here in Douglaston’s completed Brooklyn project called The Edge. 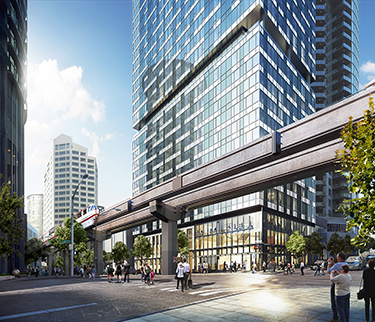 Image from Douglaston Development [enlarge]
Two restaurants will be on the ground floor of 5th & Virginia.

City officials, businesses, arts institutions and real estate developers have been more than willing to accommodate this demand for engagement, largely through increasing urban density rather than encouraging sprawl. They are rethinking overlooked and underbuilt locations while maintaining existing downtown communities that provide eclectic lifestyle opportunities that have become so popular with today's urban dweller.

Our acquisition and redevelopment of the former Icon Grill site at the corner of Fifth Avenue and Virginia Street provides an example of how downtown Seattle is being reimagined and retooled for the future. While other areas of the city — notably South Lake Union, Belltown and Denny Triangle — have experienced significant changes in recent years, the strip along Fifth Avenue that sits in the shadow of the monorail has not been part of Seattle's spectacular growth and increasing global influence. That is, until now.

Douglaston Development's goal is to help transform this overlooked slice of the city into a lively, active, mixed-use neighborhood that is consistent with new development taking place in other areas downtown. Working with the Seattle-based office of global architecture firm Perkins + Will, we are building a 500-foot tower with 431 apartments, a 155-room boutique hotel, and numerous public spaces — including a street-level restaurant, retail shops, and a rooftop bar and restaurant that will bring light and activity to this part of Fifth Avenue.

The public realm elements of our project are critical, as they provide opportunities for an authentic cultural exchange among a diverse set of participants, including apartment residents, shoppers, hotel guests, bar and restaurant patrons and passers-by. They will share an urban experience that's been more common in older U.S. cities like New York, but one that will almost certainly reshape future mixed-use development in downtown Seattle.

Erik Mott and Brad Hinthorne, principals at Perkins + Will's Seattle studio, have been instrumental in bringing this public-realm concept to life at our 5th & Virginia project.

Mott states, "Seattle's downtown community continues to evolve through vertical infill development to meet the city's vision for a vibrant and active urban environment. Through this process, underutilized sites like Fifth and Virginia are being transformed with active retail, destination dining and entertainment, and opportunities for downtown living, while accommodating out-of-town guests in a boutique-hotel environment. These offerings are catalysts in the maturing of Seattle as a world-class place to live, work and play."

Douglaston Development, now celebrating its 40th anniversary under the direction of Chairman Jeffrey Levine, isn't new to ambitious development that helps to transform forlorn urban neighborhoods into bustling, high-energy mixed-use hubs. Several years ago, we purchased a tired riverfront site in the Williamsburg area of Brooklyn. The property had long been home to a truck-parking facility surrounded by barbed-wire fencing that kept residents and visitors away from the waterfront.

There we built a new neighborhood with some 2,000 residential units, a spacious, family-friendly riverside park with recreational opportunities along the East River, parking for hundreds of vehicles, and more than 60,000 square feet of neighborhood retail.

This multi-phase project in Brooklyn is now complete, and it provides housing and amenities to condominium owners, market-rate renters and moderate-income families. While 5th & Virginia's residential offering will be limited to market-rate apartments, it will mirror the Williamsburg development's vibrant, active and transformative mix of uses, and its rich collection of public-gathering spaces.

Our Seattle project is in a critical area of downtown Seattle, providing a natural gathering point for residents and visitors at the "back door" to the city's retail core and historic Pike Place Market, which attracts some 10 million visitors each year.

The project also sits at the intersection of where Belltown, the Central Business District and South Lake Union meet, and where the street grid changes. Our goal is to kick-start the rethinking of Fifth Avenue, currently characterized, at least in part, by the monorail, parking garages and vacant lots. Our project will enliven and activate this area of downtown, and set the stage for future new development.

Seattle is a relatively young city, and it is evolving fast. Many areas of downtown have been revitalized over recent real estate cycles, while others are still in transition. As people continue to seek opportunities to live, work and enjoy downtown, it will be important for developers, city leaders and retailers to provide vibrant, mixed-use properties with dynamic public gathering spaces. Our planned high-rise in downtown Seattle is just a small part of this evolution.

Michael Kaye is CEO at New York-based Douglaston Development, which is building a mixed-use high-rise at the corner of Fifth and Virginia in Seattle.