Don’t get too comfortable with hotels

The Northwest hotel and lodging sector continues to perform well. As a litmus test for the greater strength of commercial real estate, the regional and national hotel sector has historically dropped out of favor first but tends to emerge from declines quicker.

The past few years of continued economic expansion has had a positive impact on the hotel sector, both in operating fundamentals, as well as transaction volume. We expect lodging fundamentals (occupancy and average daily rate) to peak in 2018, with growing headwinds regionally and nationally forcing the first signs of weakness in the hotel sector.

These challenges will be exacerbated through the growth of online private-accommodation aggregators (such as Airbnb and HomeAway), rising interest rates, continued tightening of monetary policy and the ever-increasing concern of substantial hotel supply increases. With that said, the lodging sector has enjoyed over nine years of continued economic growth and we expect equilibrium will return quickly with only a slight downturn, barring unexpected events, lasting through 2020.

Over the next few years we will continue to see a significant amount of new supply enter the market on a global scale. In the Northwest we are tracking over 100 hotel development projects, with the Seattle CBD accounting for more than 20 of those.

New hotel supply is starting to have an impact. In Bellevue and Redmond alone, five hotels totaling 1,010 new rooms have been completed, with an additional 804 rooms scheduled for this year. Farther south in Renton, the 347-unit Hyatt Regency opened on the shores of Lake Washington while a 110-unit Hampton Inn and Suites opened along Lake Washington Boulevard and another seven hotels representing over 1,000 rooms are scheduled to open this year in Tukwila and SeaTac.

In 2017, Seattle CBD experienced a single hotel opening with the 302-room Residence Inn by Marriott. This year we will see three more hotels with just over 1,000 rooms, followed closely by an expected 2,000 rooms in 2019.

Other challenges to the lodging industry include legislative initiatives such as I-1433 (living wage) and I-124 (safety). Although demand throughout the Northwest continues to grow, our long-run averages have never experienced such sharp increases in supply in such a brief period.

While the sheer amount of new rooms looms, there are still many bright spots, most notably in the growth of technology companies in the downtown core. As an example, Amazon continues to be the largest tenant in Seattle, occupying millions of square feet of office as phases one and two of its new world headquarters come online. Construction on phase three started in late 2016 and completion is expected this year. At full build out, Amazon will have over 13 million square feet of leased and owned space.

Fueling much of this growth is the exploding cloud-infrastructure market, where companies like Amazon, Google and Microsoft continue to invest and grow. In addition, the Seattle area is also home to hundreds of small companies and start-ups that provide cloud support services, giving Seattle the nickname of “Cloud City.”

In addition to software, other segments of the economy such as biotechnology, tourism and construction continue to perform well. Some of the more notable developments include over 15,000 new multifamily units and over 8.6 million square feet of office space under construction/renovation in downtown Seattle.

Of the total new office space, roughly 5.9 million square feet is pre-leased with just under 50 percent of this space being developed in the Denny Regrade/South Lake Union submarkets. An additional 16.2 million square feet is in various stages of planning in King, Pierce and Snohomish counties, with about half of that in the Seattle CBD. 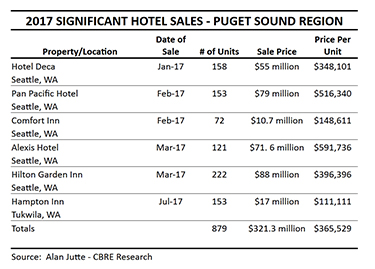 In addition to tech, office and labor growth, Seattle is posed to begin the $1.6 billion Washington State Convention Center expansion that will add roughly 250,000 square feet of exhibition space, 125,000 square feet of meeting rooms, and 60,000 square feet of ballroom space. Coupled with the Port of Seattle hosting over 1 million cruise line passengers for the first time ever in 2017, Seattle hotels are expected to continue experiencing strong demand.

During the final quarter of 2017 we observed a continuation of national hotel market trends that have characterized the performance of the U.S. lodging industry in recent years. National hotel demand continued to grow at a pace of 2.4 percent, exceeding the 1.9 percent rise in supply. The 71.4 percent occupancy level achieved during the third quarter of 2017 was the highest quarterly occupancy level recorded since 1987.

Despite the record level of occupancy, the pace of average daily rate (ADR) growth continues to slow. ADR for U.S. hotels increased by just 1.4 percent in the third quarter, the slowest quarterly growth rate since the Great Recession. The performance of the U.S. lodging market during this quarter was also impacted by the hurricanes in Texas and Florida.

The forecast for 2018 performance looks similar, albeit slightly lower, than the 2017 projections. Occupancy levels are forecast to remain flat, while ADR is expected to increase by 2.5 percent.

CBRE is forecasting minimal gains in U.S. occupancy through 2019, which would lead to 10 consecutive years without a decline. Occupancy in downtown Seattle finished 2017 in the low 80 percent range for the fifth consecutive year, compared to a national average of just over 65 percent for all of 2017.

Seattle’s revenue per available room (RevPAR) increased by 3.7 percent in 2017, slightly higher than the 2017 national average of 2.9 percent. The increase in Seattle RevPAR was driven primarily by growth in ADR, as overall occupancy is operating at its peak and has little room left to grow.

Expectations in Seattle for 2018 is for a slight decrease in occupancy and flat ADR, resulting in a slight drop of 1.4 percent in overall RevPAR. This trend is expected to continue through 2020 as new supply is absorbed not only in Seattle but throughout the Northwest.

Transaction activity was lighter in 2017 compared to the prior year, not only in the lodging space but across all commercial real estate. The total consideration during 2017 for regional lodging transactions was $312.3 million or $355,290 per unit. For 2016, the number was $754.6 million, though the per unit price was much lower at $280,606.

For 2017, there were six significant hotel sales totaling 879 hotel units. Three notable properties made up over 75 percent of the dollar volume sold in the Seattle CBD: Pan Pacific Hotel, Alexis Hotel and Hilton Garden Inn.

The relative low level of transaction activity does not indicate a lack of desire for Seattle among hotel investors. Rather, hotel owners are reluctant to dispose of assets as securing and maintaining investments in the Pacific Northwest region remains a priority to many of the large hospitality REITs and private equity groups.

For 2018, we expect a number of off-market transactions to occur with continued interest from overseas investors, particularly China. Although currently there is only a single asset on the market over $50 million in Seattle, we should note the first quarter 2018 off-market sale of the Motif Hotel as part of a larger six-property $800 million transaction. Junson Capital of Hong Kong purchased six hotels around the United States including the Motif in Seattle, with an allocated price of $145 million or $454,000 per room.

The hotel and lodging markets around the Northwest continue to perform well and grow. Although local transaction activity in 2017 was lighter than previous years, investors still perceive Seattle as a primary global market for hotel acquisitions and investment.

Many Seattle companies are at the forefront of a global shift in how businesses operate with new cloud-based services. These factors and many others continue to fuel substantial growth in the region and attract investors from all over the world.

Despite strong and growing interest in the Northwest markets, there are reasons for caution. Looking ahead, the region will continue to face challenges as an unprecedented amount of new multifamily and hotel supply will be delivered over the next 24 months. As these new properties enter the market, hotels will have to contend with new competition that will likely further dilute occupancy growth and place downward pressure on average daily rates.

Additionally, the lodging sector will continue to compete for quality employees, which will drive wages higher as the already tight labor market hovers in the low 4 percent unemployment range.

While concerns surrounding these conditions will linger, bright spots in our regional economies such as the expansion of the Washington State Convention Center, continued infrastructure spending, growing tourist demand, powerful employment drivers, and the continued growth of port and cruise demand are all positives for the long-term health of the Northwest hotel and lodging sector.