Anyone who lives or works in Seattle is all too aware of the challenges that come with being America's fastest growing city. As our economy continues to boom, Seattle struggles with housing affordability, the homeless crisis and issues of inequality. How do we manage the challenges of success and ensure that our city remains inclusive and welcoming to people of all income levels and cultures?

There are no easy answers but clearly it will require partnerships between the public and private sector. One bright spot is the on-going redevelopment of Seattle's Yesler neighborhood — a partnership between the Seattle Housing Authority (SHA), the city of Seattle and private developers, including Vulcan Real Estate.

Located within walking distance of downtown, just east of Interstate 5, the 30 acres that encompass Yesler were developed in the early 1940s by SHA as the city's first publicly subsidized and racially integrated housing community. In 2006, when it had become evident that Yesler's infrastructure and 561 aging homes needed to be replaced, SHA worked with residents, surrounding neighbors, city officials, key partners and the citizens of Seattle to master plan the neighborhood into a transit-oriented community, intended to welcome people of all income levels and cultural identities. 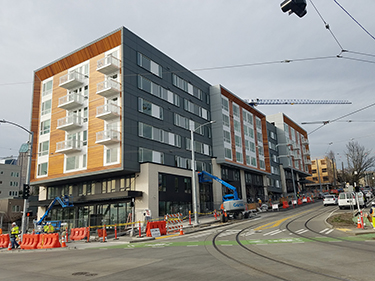 SHA is replacing all original subsidized housing units with new mid-rise apartments as part of the reimagined Yesler, which will eventually have up to 1,100 additional low-income units. In total, almost 5,000 units of low-, mid- and market-rate housing will be built in the community — much of it by private developers who purchased parcels in Yesler. Proceeds from the land sales are being reinvested into major street, sewer and other needed infrastructure repairs and replacements.

In addition to building market-rate apartments at Yesler, private developers commit to keeping a portion of their apartments affordable to households whose incomes are less than the area median income (AMI) but above the level that qualifies for SHA low-income housing. The result is a truly mixed-income community with affordable homes for people across the entire income spectrum.

Vulcan has purchased three parcels and will invest $200 million in projects that, when fully built out, will provide more than 650 apartments including approximately 130 affordable homes. In addition to its agreement with SHA to provide housing affordable to households earning 80 percent of AMI, Vulcan is voluntarily expanding affordability at its Yesler projects to households earning 65 percent of AMI, through Seattleâ€™s Multifamily Property Tax Exemption program. Other developers including Mill Creek Residential and Lowe also have plans to build market-rate and affordable units at Yesler.

Batik, Vulcanâ€™s first apartment project in Yesler, will open in March and will offer 195 apartments including 39 affordable homes. Batik will be the first apartment development within the master planned Yesler community that offers a combination of market-rate and workforce housing.

In our experience, inclusive communities start with an inclusive approach to development. At Yesler, Vulcan met with existing residents and community groups before we designed our project. We set goals for apprenticeship utilization and subcontracting with women and minority business enterprises. We have exceeded these goals by working with the Seattle Vocational Institute, ANEW (Apprenticeship & Non-Traditional Employment for Women), Tabor 100 and NAMC of Washington (National Association of Minority Contractors).

In addition to providing housing and economic opportunities for people from multi-cultural and multi-income backgrounds, one of the collective goals for Yesler is to create an inclusive community — where people of different languages (more than 15 languages are spoken by residents in Yesler), incomes, cultures and ages feel welcome, respected and valued.

One of the ways we hope to achieve this goal is though the building design and amenities Vulcan has built into Batik that will offer opportunities for residents and the community to interact and learn from one another.

In an early design meeting with the community, Yesler residents said that they didn't want a fence separating the community. We took this comment to heart and designed the building with ground-level apartments that have neighborhood stoops, retail that spills out onto a generous plaza, and a community kitchen that connects to a pedestrian pathway.

The community kitchen would be an ideal space for residents to share pot-luck meals and pop-up dinners with neighbors, or learn how to partake in a traditional Ethiopian coffee ceremony. Some of these interactions will be spontaneous, some will be programmed, and while all activities will be optional, we think Yesler will attract like-minded people who want to feel connected to the neighborhood and the global world without literal or figurative fences coming between community members.

Although early leasing has just started, future residents come from different economic backgrounds and work in a variety of industries in Seattle including education, health, restaurant, retail and tech.

Like each of Vulcan's development projects, Batik will also feature artwork designed specifically for the site. Vulcan commissioned Seattle artist Saya Moriyasu, who created an 11-foot bronze figure of a woman that will be prominently installed along Yesler Way. The artist has named the figure "Maya" whom she says "guides, protects and cares for us." SHA is also building a strong arts and culture program throughout the neighborhood.

Yesler is more than just buildings. Many visitors to the neighborhood are surprised to find awe-inspiring views of Mount Rainier and a number of new public spaces and other improvements. These include the 1.8-acre central park that will be completed this summer, several additional pocket parks (including a dog park), the green street loop, and an acre of community gardening.

In addition, connectivity has been improved with the First Hill streetcar line that connects to light rail, the rebuilt Yesler Way Bridge connecting the neighborhood to Pioneer Square, and the Hill Climb that links pedestrians to Little Saigon and the International District.

As our region continues to densify, the public and private sectors will need to continue to work together to contribute toward an inclusive community where everyone can benefit from the economic growth of our city.