Seattle is not the same city we all once knew. We are rich and deep in technology professionals and have become culturally significant beyond the grunge rock and caffeine we unleashed in the ’90s.

Seattle has evolved into an envious combination of technology and culture. Tech companies are continuing to bring new and intelligent talent to our beloved Seattle faster than nearly any other major city in the U.S. Our population growth is outpacing the national average, unemployment reached a 10-year low of 4 percent, and Seattle office vacancies will be at a stunning low in 2018 and record high rental rates are coming in 2019.

But how did we get here, and what can we expect from our city in the years to come?

Last year brought excitement when F5 Networks announced its commitment to lease all 518,000 square feet of office space at The Mark (now F5 Tower) and sent shock waves through the Seattle office market. This move took a significant central business district option off the table virtually overnight, and left an even more competitive market in its wake.

Following close behind was the 800-pound gorilla, Amazon, which secured all 710,000 square feet of the Rainier Square development before taking an additional 1.1 million square feet spread between four properties (300 Pine, Tilt49, 9th & Thomas and Yale & Thomas).

These commitments total more than 1.8 million square feet of office space leased in 2017 by Amazon alone. To really appreciate how big 2017 was for Amazon, that is equivalent to Facebook and Google’s combined total square footages in Seattle. With all this new office space, Amazon can currently seat 40,000 employees in Seattle, compared to 2010 when it employed 5,000.

Amazon has blown past Starbucks and Nordstrom as the largest city employer, and no one will catch the tech giant anytime soon. Under their existing commitments, Amazon will have the capacity to employ 90,000 people in Seattle by 2020.

It is easy to see the contributions these big names made to the growth and competition of the Seattle markets, but we welcomed many other companies to Seattle last year including Airbnb, Coupang, Stripe, Pinterest and Lululemon. We also grew with the more established companies including WeWork, Oracle, Google and Pitchbook.

Clearly, 2017 was another banner year for Seattle office real estate. We expanded the big boys and welcomed new faces to the Seattle landscape. By year’s end, vacancy dropped to 5.3 percent, we added 2.8 million square feet of new office buildings, and with this Seattle experienced a surge of deal velocity few cities have ever seen.

Looking ahead for 2018, we see similar outcomes as the previous year, but now in a much different way. Unlike 2017, this year will not deliver any new office space. With the non-existent new supply and the availability of existing office space declining, we expect the vacancy rate to drop to 3.2 percent by year end. The last time Seattle’s Class A vacancy rates were below 4 percent was in the first quarter of 2001.

All eyes will be on the activity of the three new construction projects set to deliver in 2019: 2+U brings 685,000 square feet, 333 Dexter promises 650,000 square feet and 1818 Fairview provides 205,000 square feet. With large blocks of space being limited and the tremendous activity these projects are having, we predict half of the combined 1.5 million square feet will be accounted for before 2019. 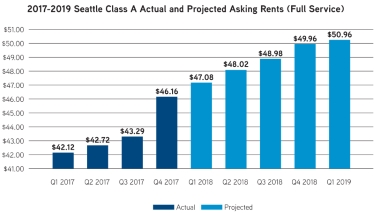 With the new construction projects focusing on large users, many tenants will be fighting for space throughout the CBD and landlords will have leverage over pricing with minimal concessions. Madison Centre, which became available at the end of 2017, is one of a few new construction projects in Seattle that is multi-tenanting a building. For tenants in the market demanding large blocks of space, options are limited and prices are climbing. Users looking for single floor options still have a variety of possibilities and promising terms.

Through the tremendous activity of the new construction projects and the existing office supply spoken for, Seattle is set up for a bright future in the years to come.

Seattle continues to advance a culture that is conducive to innovation across technology and the Seattle office market has been historically enhanced with the obvious arrival and evolution of Amazon, Facebook and Google. The expansive tech community at large is a major factor in Seattle’s growth, with moves from the Bay Area and the East Coast to new homes in the Pacific Northwest.

With all the great news coming from job and business growth, low vacancies, limited new supply and historic rent growth, the Seattle market is positioned to tighten as demand continues to rise.

Connor McClain is one of Seattle’s up-and-coming brokers at Colliers International, recognized as a Power Broker by CoStar. He represents office organizations across the U.S. and abroad.